This is the stark image of the silent killer everyone who drinks too much should remember.

Shrivelled and lumpy, the liver belongs to someone who has developed advanced cirrhosis.

The condition can develop without any noticeable symptoms until the damage to the organ becomes so serious that it is far too late to do anything about.

In fact a person’s first knowledge that they have anything wrong with their liver can be when they are admitted to hospital with a massive internal bleed or jaundice – death rates for both run at fifty per cent.

More women are developing cirrhosis – and at a younger age – and doctors are laying the blame firmly on alcohol abuse. 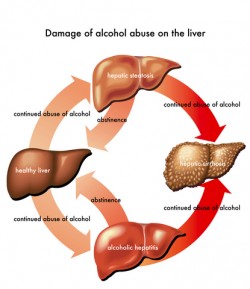 Cirrhosis is the silent killer that creeps up on you.

Liver and alcohol expert Dr Nick Sheron, who works at Southampton General Hospital, is already treating younger women – some in their late twenties – for liver cirrhosis.

And he warned the trend would get worse in the next few years as more women are currently drinking more than ever before and will go on to develop the crippling disease.

“We have certainly seen an increase in women developing liver disease. Going back 15 years it used to be a ratio of two men to one woman. Now we see men and women in equal measure.

“Many people may not be aware they are developing liver disease as there are no signs or symptoms.

“In most cases the first sign something is wrong will be when they come into hospital with a massive internal bleed, jaundice or fluid in the tummy.”

He said all of these symptoms of the disease were very serious with high death rates.

Latest figures from Southampton General Hospital reveal there were at least 946 liver admissions in total in 2007 – with more than 90 per cent of these due to alcohol.

It’s known as a silent killer because at least one in five people who show signs of liver damage die within a matter of months.

“There is a lot more equality between men and women. That is a good thing but it also means that women are drinking just as much as men.

“If you go back 20 years, a woman might have had half a glass of beer while today wine is anywhere up to 14 per cent alcohol by volume – three times as much as beer or lager.

He also warned that women doubled the risk of developing breast cancer by drinking a bottle of wine every night.

Dr Sheron added that nowadays people get more alcohol for their money too which exacerbates the drinking culture.

As a member of the UK Alcohol Health Alliance, Dr Sheron is lobbying the Government to increase the cost of alcohol.

“There is a direct correlation between affordability of alcohol and the number of women dying of liver disease and other alcohol-related deaths,” he said.

“We need to see a gradual and steady increase in taxation on alcohol in line with people’s wages. “This is what happened until the past 20 years, when alcohol has become proportionately much, much cheaper.”

According to the British Liver Trust more than 4,000 people in the UK die from cirrhosis and around 700 people have to have a liver transplant each year to survive.

In another worrying trend more women than men were last year admitted to hospital in Hampshire with alcohol poisoning, with symptoms including mental confusion, vomiting, seizures, slow and irregular breathing and severe metabolic problems.

In 2007/2008, 663 people were taken to hospital in Hampshire, Southampton and the Isle of Wight with alcohol poisoning, comprising 280 males and 383 females.

The celebration is not yet over for St. Patrick’s Day. With more festivities to come over the upcoming weekend, concerns about binge drinking inevitably pop up. According to the Office of Juvenile Justice and Delinquency Programs, a program ran by the U.S. Department of Justice, approximately 90 percent of the alcohol consumed by people under….

Does affordable drug treatment really exist? Yes. There are facilities that do provide affordable treatment to patients. Often, these facilities are government run. As stated by the NIDA, “Because drug abuse and addiction are major public health problems, a large portion of drug treatment is funded by local, State, and Federal governments.” This is where….

The Biggest Little City gained notoriety in a 2006 edition of the New Yorker after two Reno police officers estimated that ignoring one of the city’s homeless chronic alcoholics cost the city more than $1 million over the years. Malcolm Gladwell’s story quoted Reno police officers Patrick O’Bryan and Steve Johns explaining that Murray Barr,….

Oregon Health & Science University Cancer Institute researchers have pinpointed the protein that can lead to genetic changes that cause lung cancer. Researchers discovered that the production of a protein called FANCD2 is slowed when lung cells are exposed to cigarette smoke. Low levels of FANCD2 leads to DNA damage, triggering cancer. Cigarette smoke curbs….