What happened to Michael Jackson was heartbreaking. I think that he was frightened all his life and took prescription drugs to deal with it. I did the same. I was addicted to an anti-anxiety drug — as was Jackson, reportedly — and they can be more addictive and harder to come off than heroin.

Why do ordinary people like me become addicted to prescription drugs? It’s for the same reason that celebrities get hooked on painkillers, antidepressants and anti-anxiety drugs. Something in their childhood — trauma, shame, a sense of inadequacy — makes them feel that they can’t cope with life.

I was shy and frightened as a child. I knew that I was different. My dad wanted me to play football, but I hated sports, and thought the other boys were rough and scary. I refused to take the route that Dad saw as normal, and stayed at home making pastry with Mum. This was in a Warwickshire mining community in the 1960s. At school I was the one in the perfect uniform while the other boys had their bums hanging out of their shorts. I was picked on and beaten up.

You realise that other people don’t think you’re quite right, and you are ashamed. You feel you are less than you should be. Some react by becoming super-achievers and others by becoming withdrawn — as I did, until drugs changed everything. 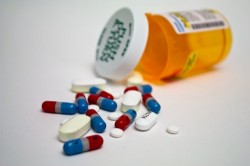 Prescription drugs can be highly addictive when mistreated.

I got a job in a factory. Working with 4,000 homophobic Coventry City supporters at the age of 16 I became even more anxious, went to a doctor, and said to him: “I can’t cope with life.” He kept his eyes on his pad and prescribed Ativan, an anti-anxiety drug. I took it every day for 16 years. Pain and anxiety went far away. I was able to deal with the world. When I went to apprenticeship college soon afterwards I discovered alcohol, and this seemed to increase the effect of the drug. It was like a grey world became colourful.

I had a repeat prescription card and I just kept handing it in. If I was taking the pills and drinking I felt more able to communicate with people, and that took me into new avenues, such as local politics. But the more responsibilities I had the more dependent I became on my props.

I kept trying to become “normal”. In my mid-20s I got a suit and became a salesman. I refused to acknowledge my feelings for men, married a wonderful woman and had a lovely daughter. I got a big house, a Range Rover and two labradors. But this “normality” created new stresses and I took more and more alcohol and Ativan. I got kicked out of my last job, started to run pubs, and began to get blackouts during which — so I’m told — I threatened and fought people, even policemen. I was taken to a psychiatric hospital and put on to Valium, to which I also became addicted.

I began to turn things around only when I started attending Alcoholics Anonymous meetings in 1987 at 36, and I’ve been sober ever since. Getting off the Ativan and Valium was harder. I had to gradually reduce the dose. The night sweats were so bad that I had to surround myself with towels, and I got terrible panic attacks. Coming off heroin takes an average of two weeks. It takes nine months to come off Ativan.

As I began to recover, I came to recognise my attraction to men. Telling my wife that I was gay was one of the most painful things I’ve had to do. But seeing how I really am has been the key to not being dependent on drugs any more.

I am now head of an addiction treatment programme at the Priory North London and I’d say that 40 per cent of the people who come to me with an addiction problem are dependent to a greater or lesser extent on prescription drugs. It’s getting worse, partly because such medicines are becoming so easy to get over the internet without prescription.

But for many people I think the problem is that they were prescribed by a doctor in the first place. You feel terrible, and the doctor says you should take this drug to make you feel better. You do what the doctor says. The drug does this, and you can’t stop taking it because if you do you will feel terrible again. I don’t blame doctors — you can understand why their approach is to prescribe drugs to alleviate symptoms. Unfortunately, they don’t have the time or resources to get to the deep root of the problem.

The causes of dual diagnosis

People start taking drugs for a number of reasons. The causes of drug abuse or substance abuse in people are discussed below. Many teenagers get into drugs out of their curiousness or for a sense of adventure for these substances. Some also take drugs for enjoyment. Many people also believe that drugs help them improve….

Depression affects millions of people worldwide causing grief and despair that interferes with regular routines, happiness and lifestyle satisfaction. According to the University of Michigan Health System, depression is most often recognized early in life during the late teens or early stages of adulthood. Unfortunately, the signs are often overlooked allowing the severity of the….

Researchers at Boston University School of Medicine (BUSM) have found that heavier intrauterine cocaine exposure (IUCE) is associated with mild compromise on selective areas of neurocognitive development during middle childhood. The BUSM study appears in the May issue of Neurotoxicology and Teratology. BUSM researchers evaluated whether the level of IUCE or the interaction between IUCE….

Unfortunately, relapse is a common occurrence after an addict completes treatment for any type of addiction whether it’s an alcohol addiction or a drug addiction. Luckily, even after relapse you can still get back on track with the help of a treatment center. Treatment centers can help you overcome the feelings of defeat that occur….

Calls to numbers on a specific treatment center listing will be routed to that treatment center. Additional calls will also be forwarded and returned by one of our treatment partners below.

Calls to any general helpline (non-facility specific 1-8XX numbers) for your visit will be answered by ARK Behavioral Health, a paid advertiser on TreatmentCenters.com.