Prescription drug abuse is steadily worsening because as more pain, anxiety, or attention deficit disorder medications are disbursed for legitimate purposes, many are being diverted to sales on the street for profit. The prescription pill business is big business on the street with a vast amount of collaboration between users, dealers, and doctors. The rapid rise in “pill mills”, internet sales, and other illicit acquisitions makes it easy for anyone to obtain highly addictive prescription drugs for abuse.

We spent a lot of time worrying about heroin addictions in the past, now, we have much larger problem with prescriptions drugs and no end in sight for the abuse of them. According to the National Institute on Drug Abuse, “In 2010, approximately 7.0 million persons were current users of psychotherapeutic drugs taken non-medically (2.7 percent of the U.S. population).”

The most widely abused and addictive prescription drugs are: 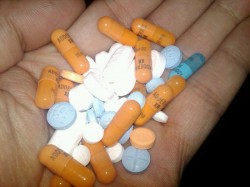 There are several different types of prescription drugs which are abused all too often.

Like heroin, opiate painkillers are highly addictive both physically and psychologically. Opiates act as CNS depressants and affect every part of the person’s body. There is a high potential for overdose on these drugs as they slow down the respiratory and cardiovascular system. With repeat or prolonged use, the person’s health deteriorates and they become psychologically impaired. Opiate abusers will often engage in dangerous or criminal behaviors and IV users risks diseases such as HIV or AID’s.

CNS stimulants are often prescribed to children for ADD or ADHD and they are often obtained by other family members who abuse them with the misconception that they are safe. Prescription stimulants affect the CNS system and can speed up processes that make them dangerous. Amphetamines can produce similar effects to cocaine and they can be just as addictive and deadly when used in high frequencies or amounts. They have detrimental effects on the central nervous system, impairing the brain, the heart, the lungs, and other organs. Increasingly, CNS stimulants are responsible for overdoses, seizures, and sudden cardiac death.

CNS depressants slow down activity in the brain and central nervous system which controls every other system in the body. Decreased respiration, heart rate, and blood pressure can be fatal. CNS depressants are often prescribed to treat acute anxiety, panic, and other psychological disorders and abuse can lead to serious physical and psychological problems. There is a high risk of overdose when these drugs are combined with other CNS depressants such as opiates or alcohol. Users risk brain damage, coma, seizures, stroke, and other fatal dangers from CNS depressant abuse.

Parents are willing to have their children’s doctors screen the adults for alcohol problems and make a recommendation about what to do, a study found. The American Academy of Pediatrics has recognized the child health care visit as a good place to deal with family issues, but there was little information about how parents would….

Twice as many calls are made to ChildLine by young people concerned about their parents’ harmful drinking in Scotland than the rest of the UK. More than 230 Scottish children called ChildLine with their fears last year, according to a study. The majority of youngsters reporting concerns about their parents’ drinking also talked about physical….

NASHVILLE, Tenn. – There are major differences between men and women when it comes to battling drug and alcohol addiction. It turns out women are more likely to fall into addiction and more likely to develop serious health problems because of it, according to a Nashville area substance abuse facility. For more than 40 years,….

The availability of cheap alcohol has led to calls for minimum prices in Wales to change the drinking culture. Brian Gibbons, Wales’ social affairs minister, says he wants to see alcohol strength taken into account in pricing. Scottish ministers are preparing laws on minimum pricing, and Dr Gibbons has discussed the issue with them, although….