It Tells You something about the novelty of a French debate about “le binge drinking” that an equivalent French term has yet to enter into common usage and that whenever the media broach it, they feel obliged first to explain to people what exactly it is.

They’ve been doing a lot of explaining lately. According to Paris city hall, the number of under-17s who drink more than five glasses of alcohol in a single sitting at least three times a month rose by about 20 per cent between 2005 and 2008.

In the past three years, meanwhile, the numbers of minors finding themselves at accident and emergency departments suffering from the ill effects of having drunk too much has doubled. Girls are more likely to drink heavily than boys.

“It’s not as big a problem as it is in Ireland or Britain,” says a spokesman for Jean-Marie Le Guen, city hall’s head of public health. “But clearly it’s worrying, because we see a change among young people in the way they’re consuming alcohol.” 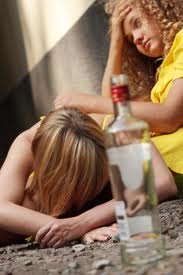 Teen binge drinking is on the raise in Paris, France.

In a country where public drunkenness is frowned upon and where there has always been a tolerant attitude to young people drinking moderately, binge drinking (or “la biture express”) has become something of a preoccupation recently. In a bid to curb it, Paris mayor Bertrand Delanoë has invested heavily in an elaborate online campaign to warn young people of the effects of overdrinking.

Under the slogan “Drinking too much is a nightmare”, the centrepiece of the multimedia campaign aimed at 15-25 year olds is a slick horror-themed website where young people can enter a competition for the best video clips on the theme.

Officials at the Hôtel de Ville (city hall) believe one of the reasons for the recent rise of the problem was the tightening of the law last year on the sale of alcohol to under-18s. Previously, there was what one official calls “a semi-tolerant attitude” towards older teenagers buying beer (if not spirits) in a bar or club, but the new law removed any ambiguity.

“We went from a regime of semi-freedom where between 15 and 18 years of age, you could have a beer, and there was a certain tolerance about alcohol drinking,” a spokesman says.

“Now the law is tighter, which from a public health point of view is helpful. Yet you have a situation where young people have developed the drinking habits but where they can no longer go to bars or nightclubs to drink. What has happened is that some of that drinking has shifted elsewhere – now they drink at home or in the open.” The rising popularity of drinking games has also been a factor, he adds.

But not everyone is convinced that French teenagers are simply absorbing the sort of binge drinking culture found in Ireland and Britain. A study of 16-21 year olds carried out last year by Inserm, the health research agency, found that while young French people drank a lot, they stretched their drinking over a much longer period on a night out.

“Young French people do not drink in the same way as the English,” Marie Choquet, research director at Inserm told Le Parisien . “They drink a lot but in a more spread-out way. And there’s a French specificity: they eat, dance, chat – activities that mean they don’t stock alcohol in the same way as you would by drinking a bottle while sprawled on the couch.” Just 5 per cent of 16-25 year olds were regular binge drinkers, she estimated.

And just weeks after the British government tacitly acknowledged that its policies to stem binge drinking had failed by announcing that it was banning pub and club promotions that encourage heavy consumption, international comparisons offer reassurance to the French that their problem is not quite as entrenched as elsewhere.

The most recent figures compiled by Espad, a European school survey project on alcohol, found that French teenagers were about average in their alcohol intakes. The Danes lead the pack, with 73 per cent of 16 year olds claiming to having been drunk at least once in the past 12 months. Ireland is above average, at 47 per cent, while France is a middling 36 per cent. Perhaps “le binge drinking” isn’t the best translation after all.

The mental state of an individual largely governs his social behavior, his physical health and also his overall personality. If an individual is not sound mentally then there are possibilities of him generating some kind of disorders or getting addicted to harmful things. Eating disorder is one of the many different disorders that are likely….

Treatment of Eating disorder for teens

The specific pathway through which binge drinking contributes to clogged arteries has been identified by University of Rochester Medical Center researchers. Alcoholic beverages contain ethanol, which is mostly converted into acetaldehyde. The Rochester team found that binge drinking-related levels of acetaldehyde make immune cells called monocyctes more likely to stick to blood vessel walls and….

It is no wonder that America has the highest rate of prescription drug abuse in the world. We have drugs for everything that ails us and drugs to counter the unwanted effects of those drugs. The most widely abused pharmaceutical drugs are opiates and opiate derivatives for pain, CNS stimulants for ADD, ADHD, and narcolepsy,….