An Overview of Anorexia Treatments

The Dangers of Anorexia

Anorexia is an eating disorder that can result in a person losing vital nutrients they need for good health, and in a person losing bone mass. People who suffer from anorexia commonly have a distorted body image of their self, and frequently will not consume a healthy amount of food, if any.

According to the National Association of Anorexia Nervosa and Associated Disorders, anorexia is characterized by a relentless strive for thinness and the unwillingness to maintain a normal or healthy weight, as well as a distortion of body image and fear of putting on weight, and disturbed eating behavior. In addition, a lack of menstruation is common.

People with anorexia will lose, or attempt to lose, weight in different ways. Some people excessively exercise and diet, while others will eat and then make themselves throw up the food, or they will misuse laxatives. Anorexia is a difficult disorder for any person to live with, and it can cause a person a great deal of pain and health concerns if they do receive help for their disorder. 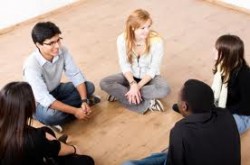 Therapy is a main component of treatment for anorexia, and group therapy can be a great help.

According to the National Association of Anorexia Nervosa and Associated Disorders, cognitive behavioral therapies and psychodynamic therapies are the most common used treatments of anorexia. Since there is not one definitive form of therapy that is recommended for eating disorders, often a therapist will evaluate where the patient is and then decide on the best therapy approach to take.

There are different types of therapy available to help people overcome anorexia, and each individual will need a therapy that caters to their individualized needs. If a person attends an inpatient program they will reside at the program and receive 24/7 care and will engage in therapy sessions extremely frequently. At an outpatient program a person will attend therapy meetings on particular days and times that fit around their schedule, so that they can still keep their daily responsibilities while receiving treatment. In addition to therapy, through anorexia treatment programs, a person will also have a nutritionist to help them learn healthy ways of eating again.

Remember all the risks of binge drinking

Drinking heavily is not uncommon in Pullman. Whether it’s because of our age, peer pressure or some other reason straight out of the D.A.R.E. program, it happens. And while I’m sure you’re well aware drinking too much equals a hospital visit, there are a slew of other issues you should be aware of before going….

Alcoholics Anonymous helps local man find sobriety, happiness Tom has been sober for 27 years, but the road to recovery was far from easy. “It’s still one day at a time,” he said. “The only person that can say you’re an alcoholic is the person themselves.” Every day is a struggle. “I will always been….

Bath salts, the synthetic drug also known as MDVP or methylenedioxypyrovalerone, has been found to be more dangerous than cocaine which causes much reason for alarm. This drug causes prolonged effects of the neurotransmitters responsible for dopamine and norepinephrine by blocking reuptake at brain nerve cells. The result is increased hyperactivity, rapid heart rate, increased….

The economy is cascading downward at a rate unheard of since the early thirties. Unemployment is rising at a staggering pace, and many flagship industries are closing their doors or cutting production, adding thousands more workers to the unemployment line. President Obama’s stimulus package is designed to stop the economic hemorrhaging and return the nation….