What Parents Can Do to Prevent Teenage Alcohol Abuse

Compared to other forms of drug use, teenage alcohol abuse rates have seen a gradual decline over the years, though present-day rates remain quite high. According to the National Institute on Alcohol Abuse & Alcoholism, as much as 30 percent of teenagers report drinking by the eighth grade with 54 percent reporting at least one drunk episode by the 12th grade.

As hardheaded as teenagers can be, they nonetheless still value parental concern and approval. Parental influence, the approach parents take and last, but not least, real-time parent behaviors can go a long way towards preventing teenage alcohol abuse. 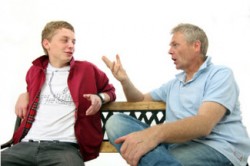 Talking to your teen about the dangers of alcohol abuse can go a long way.

It may surprise some parents to know that teenagers expect a certain amount of input from parents depending on the issue at hand.

On the flipside, the likelihood a teen will engage in excessive drinking increases fourfold for teens who feel parents should have no authority over their drinking behavior. In this instance, parental authority (or the lack thereof) becomes the central issue.

In effect, parental influences can have a bearing on teenage alcohol abuse behaviors provided parents communicate their expectations on some level.

Parenting approach has to do with how parents interact and communicate with their teens. In turn, the type of parenting approach used forms the basis for how teens learn to solve problems and manage their emotions.

A combination of discipline and support provides the healthiest environment for teens to develop. Stated rules and firm consequences combined with support of teen accomplishments gives teenagers the tools needed to handle life choices in a responsible manner.

When all is said and done, a consistent parenting approach that employs discipline and support offers the best means for reducing the likelihood of teenage alcohol abuse.

The old adage, “Do as I say, not as I do” won’t go very far when it comes to preventing your child from engaging in teenage alcohol abuse. With all the mixed messages teenagers contend with on a daily basis, mixed messages from parents do more harm than good.

Excessive drinking in front of teens or allowing teenage drinking in the home inevitably plants the seeds for teenage alcohol abuse to develop. In other words, “Monkey see, monkey do” is the more likely result.

The risk of teenage alcohol abuse increases considerably when communications between parents and teens is lacking. This entails periodic discussions about alcohol and its effects, especially when life examples provide genuine opportunities for discussion.

Staying in touch with other parents can also reduce the risk of teenage alcohol abuse from taking root in your teen’s life. When teens do break the rules, following through on stated consequences is essential to getting the message across.

Many unaware of alcohol calories

Many people are unaware of the calorie content of alcohol, a survey shows. Four in 10 did not know a glass of wine has the same calories (120) as a slice of cake, or that a pint of lager and a small sausage roll have 170 each. The poll of 2,000 adults in England was….

Christian treatment centers have a high success rate at not only helping people come clean from their addictions but also helping them stay clean once a person leaves the treatment center. One of the main reasons why Christian based treatment centers are effective is because many people who join become firm believers in Jesus Christ….

Need for Senior Addiction Treatment Centers on the Rise

Increasingly, the need for specialized treatment centers for seniors becomes more and more important. A growing number of seniors are struggling with a range of addictions such as alcoholism, addiction to prescription medications and various other addictions. Because seniors respond differently to drug addiction treatment and have varied reasons for using drugs the need for….