Teenage drinking is such a health risk that pediatricians are now being told to screen all teenagers—and even sixth graders—for alcohol use. That new policy from the American Academy of Pediatrics can be a powerful tool for parents to help their children avoid trouble with alcohol. But first, parents need to learn to give teenagers some privacy in the doctor’s office.

“Tenacious parents who will not leave the examination room” are cited as a major barrier to routine screening for alcohol and drug use by pediatricians in the new teen alcohol screening policy. And what 13-year-old would want to tell Mom she pounded five Vodka Cruisers at a party? “We want to keep families involved,” Patricia Kokotailo, director of adolescent medicine at the University of Wisconsin School of Medicine and Public Health told me, “but some things are very difficult for teenagers to express if it’s not confidential.” She is also lead author of the new guidelines. When Kokotailo sees teenagers in the office, she usually talks with them privately before speaking to the family as a whole, but doesn’t reveal anything that children want kept private. 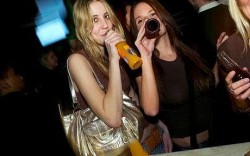 Teenage drinking is a growing problem.

Mounting research showing that the teenage brain is in the midst an amazing developmental phase was a chief driver behind the call for universal screening for alcohol use. That brain growth spurt gives teens remarkable cognitive powers, but also leaves their brains more vulnerable to the damaging effects of alcohol, drugs, and tobacco. Recent research has also shown that the earlier teenagers start drinking, the more likely they are to have problems as adults with school, jobs, and relationships.

There’s abundant evidence that no matter how much teenagers diss grown-ups, they still view their parents as their biggest role models. And while the pediatricians are calling for some privacy in the exam room, they emphasize that strong parental involvement is key to controlling teens’ drinking. That’s great motivation to tell your children what you might have hesitated to say before:

“Prevention is a big thing,” Kokotailo told me. “We now know better how alcohol affects the brain and neurodevelopment of young people.” Her hope is that with more pediatricians asking about teenage drinking, and with more parents telling children what they need to know about alcohol and keeping a close eye on their behavior, teenagers will be better equipped to make their way to a healthy adulthood.

Cancer- preparing for the treatment

A cancer diagnosis can be very difficult for the patient to cope up with. When you are diagnosed with cancer, it is the time to discuss with your doctor about the various treatment programs available for your successful treatment. The doctor generally suggests the patient for the right treatment program. Preparing for the cancer treatment….

Miller Jordan Jr. never gave up on his only son. The Clarke Central High School assistant principal tried for years to get treatment for Miller Jordan III’s mental illness. But the younger Jordan stabbed his father and grandfather to death Dec. 30 – hours after doctors sent Jordan home from a hospital where he told….

FRAMINGHAM, Mass. — Facing a dozen strangers seated around a table, the heavyset man with thinning hair put down his coffee and paused before introducing himself: “My name is Christian. And I’m a compulsive overeater.” For the next hour, members of the MetroWest Intergroup of Overeaters Anonymous shared personal stories of long-term weight gain and….

N.Y. among highest rates of drug, alcohol use in country

Nearly 1.4 million New Yorkers abuse or are dependent on alcohol, drugs or both. A new report from the Substance Abuse and Mental Health Services Administration (SAMHSA) provided this and other information about substance abuse and mental health patterns in each state. Rates vary state to state, but all areas of the country are affected….

Emerson’s Center for Health and Wellness is sponsoring Alcoholics Anonymous meetings on campus, responding to a student’s initiative to offer the outlet to sufferers of alcoholism. A student-led action to offer an outlet to those prone to the accessible excesses of collegiate life, the program was founded by Brady Frome, a sophomore Theatre Education major….