Statistics prove the link between alcohol and depression reveal the Linwood Group. In the past, many in the medical profession have tended to view alcohol and depression as separate issues. However increasingly, research is showing that they are indeed strongly related to one another. In fact, after surveying over 14,000 people with early onset symptoms of both depression and alcohol dependence it was found that: ‘the relationship between depression and alcohol is quite strong, especially among women. When women experience symptoms of depression, they are at increased risk for alcohol dependence subsequently.’ This link is of increasing importance, given the fact that nearly twice as many women (12 percent) as men (7 percent) are affected by a depressive illness each year and that at some point during their lives, as many as 20 percent of women have at least one episode of depression that should be treated.

So is depression triggered by drinking alcohol, or do people turn to drinking once they begin to feel depressed? Sue Allchurch, director of Linwood Manor Group, explains further: ‘As is well documented, alcohol is a depressant and a person who chooses to drink to excess on a regular basis will be exposing themselves to the continued depressive effects of alcohol. However there are many factors that can trigger both alcohol dependence and depression, including how a person chooses to ‘self-medicate’ to cope with the stresses in their life, chemical imbalances in their body, the environment they live in and whether they have a family history of either alcoholism or depression. 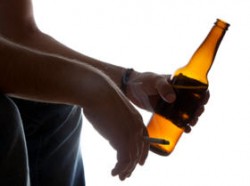 Alcohol dependence is substance based addiction.

‘Whether the drinking began before the symptoms of depression, or a person began to drink to ‘get through the day’, the fact remains that people who regularly drink alcohol in order to cope with difficult situations or emotions find that this form of ‘self medication’ eventually leads to even more extreme situations and emotions. In fact, apart from affecting their mental health, consuming alcohol also affects a person’s memory and brain function and can be linked to increased anxiety levels and panic attacks and in severe cases with paranoia and mental confusion.’

Whether it is drinking alcohol or depression, the two are so inter-twined that it has been shown that the earlier in a person’s life that either of these two disorders develops, the greater the chance that the other will also arise. So, what are some of the symptoms of both to look out for? The Linwood Group has developed its Traffic Light System to provide a simple way of showing the symptoms of alcohol dependence. For depression, the Royal College of Psychiatrists recommends looking out for at least five or six of the following symptoms:

Due to the close relationship between alcohol and depression, treatment centres such as Linwood are increasingly developing treatment programmes tailored to treating both depression and alcohol related abuses. Sue Allchurch continues: ‘We have found that typically, depression associated with alcohol problems resolves itself when the alcohol dependency ceases; giving those struggling with alcohol dependency even more reason to seek help and support.’

So, if you recognise any of the symptoms of alcohol dependence and depression in you or a family member, why not give a treatment centre such as Linwood Group a call to get free, confidential, professional advice on taking those first steps on the road to recovery? Freephone: 0800 066 4173 or if you are calling from a mobile phone or from overseas, call 01226 698 054?

Managing alcohol addiction, including free drinks, has worked wonders — and shows why we must treat addictions equally Every day, in the shadow of Parliament Hill, 30 homeless alcoholics are fed, housed and served drinks, each hour on the hour, between early morning and evening. That this “managed alcohol” program run by Ottawa’s Inner City….

Getting treatment when it all falls apart

Substance abuse has become a 21st century epidemic with one in four homes affected. While it may seem like a personal problem, citizens pay the price in law enforcement and court costs: domestic violence, divorce, and policing drunks on the road and dealers on school campuses. The statistics are sobering. In 2008, Ottawa County alone….

Side effects of over consumption can be fatal

When it comes to drinking, it seems as though Americans are fond of taking an alcoholic beverage from time to time. In a Gallup Consumption Habits poll, 63 percent of Americans reported that they drink alcohol, while 37 percent reported they abstain. While alcohol is typically not harmful in moderation, and can actually be beneficial….