Debbie Allen felt sick when she heard about the death of 15-year-old Sarah Botill after a night of drinking Dec. 5 at a weekend sleepover in Gilroy.

Like Sarah, Shelby Lyn Allen, 17, was drinking with two friends late at night. Both Sarah and Shelby Lyn became ill and started throwing up. Both girls were so ill by morning they had only faint pulses and were unconscious. Both died shortly after calls to 911 around 9 a.m.

“Young adults think vomiting is a normal thing,” Allen said. “They don’t see it as a big deal, an alarm. If they’re vomiting and fall unconscious, the only way to save them is to get medical attention.”

After dropping for decades, binge drinking among California teens is on the rise, and the consequences are more deadly than ever. 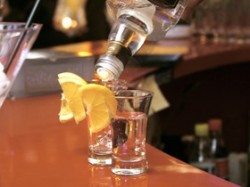 California teens participating in binge drinking is on the rise!

Hard liquor has replaced beer as the alcohol that teens reach for, and vodka is the drink of choice, several experts said. By consuming some of the many sweet drinks with vodka aimed at the youth market, or mixing vodka with cola or orange juice, young drinkers can consume large amounts without tasting the alcohol.

“People don’t realize how serious it is,” said Renee Zito, director of the California Department of Alcohol and Drug Programs. “It is increasingly a major problem in California.”

After her daughter’s death, Debbie Allen founded the Shelby Lyn Allen Alcohol Poisoning Education Foundation. She speaks around the country about the dangers of binge drinking, defined as consuming five or more drinks of alcohol within a two-hour period for men, or four or more in that time frame for women.

The need for more education is clear.

The number of California teens engaging in binge drinking has edged up since 2001, especially among middle and high school students.

“Alcohol poisoning isn’t so much a destination as a journey,” said Ralph Castro, who manages the substance abuse prevention program for Stanford University. “Meaning there are signs and symptoms that occur along the way. The end result is coma and death.”

Castro said the importance of getting students help in time when they get sick from drinking too much has prompted some colleges to start amnesty or “good Samaritan” policies where “if somebody calls for someone who needs medical attention, they won’t get into trouble.”

At Stanford, “we don’t have a written policy, but what we have is a kind of an unspoken contract with students,” he said. “I tell students they have the responsibility to look out for themselves but others as well. If someone needs help, students call for help.”

What sort of help depends on the severity of the case. If a person is unconscious, having trouble breathing or has repeated, uncontrolled vomiting, experts recommend an immediate call to 911.

Many teens aren’t willing to take the risk of binge drinking.

“I think it’s a stupid thing to do,” said 17-year-old Alex of Los Gatos, who asked that his last name not be used to avoid razzing from friends. “I know people who do, but I don’t think they fully understand the consequences of their actions.”

Nina Weis, 16, of San Jose said, “It wasn’t worth taking the risk” to binge drink.

“You do stupid things and you can’t think, and then bad things start happening,” she said.

It is unclear what caused the death of Sarah Botill in Gilroy. Police had said initially that “alcohol poisoning could have contributed to her death,” but the Mercury News reported Friday that a large amount of water was found in the teenager’s lungs, suggesting she might have drowned after drinking with her friends. One of her friends tried to sober her up in the shower the next morning. In an unconscious state, it is possible to drown in an inch or two of water, experts said.

Debbie Allen said she would give anything if the girls who drank that night with her daughter had called for help.

“Some kids are afraid they’ll get in trouble with their parents or the law, but if somebody is unconscious, if you shake them and you pinch them and you can’t wake them up, right then it’s time to call 911,” she said.

After Shelby Lyn became violently ill and semiconscious, she was propped up next to a toilet, and her friends went to bed. Shelby Lyn had consumed 10 to 15 shots of vodka in about two hours; one of the other girls had five or six shots and the other girl had eight shots, according to a report by the Shasta County District Attorney’s Office. One of them got up a couple of times in the night to check on her.

That girl, who was 17, was charged with involuntary manslaughter in connection with Shelby Lyn’s death, but the charges were later dropped.

“I will go anywhere to talk about this,” Allen said. “I’m throwing out Shelby’s seeds of education into the crowd. If I catch just one child with one of them, that’s saving one more life.”

One part of the prenatal brain that may be particularly sensitive to alcohol’s effects is white matter, nerve fibers through which information is exchanged between different areas of the central nervous system. A recent study has demonstrated that alcohol consumption during pregnancy can alter the microstructural integrity of developing fetal cerebral white matter in the….

Despite the Surgeon General’s warning that alcohol can affect unborn children, pregnant women haven’t changed their drinking habits much over the past two decades, the CDC said. The average annual percentage of pregnant women who drank remained relatively stable at about 12% for any alcohol use and 2% for binge drinking, C. H. Denny, Ph.D.,….

Doctors to treat alcoholics with taste of The Good Life

Successfully persuading chronic alcoholics of the virtues of gardening and a good diet may appear like an impossible task, but doctors are to start promoting The Good Life model in a bid to cure Scotland’s drink problem. Teaching problem drinkers how to grow and cook healthy food is to be a key part of a….

A program that gives homeless alcoholics a place to live and drink is saving taxpayers more than $4 million a year, according to a study released Tuesday. The study, published in the Journal of the American Medical Association, endorses a “housing first” approach that calls for putting homeless people in permanent homes with supportive services….

Many people who are addicted to alcohol or who suffer from alcohol abuse do not seek help simply because they cannot find an affordable treatment option that works for them. This is very sad news because studies show that more than 90% of those who suffer from substance abuse will never get the help that….