Once a person joins the military they will receive health and dental care for themselves and for their family. Military men and women who fight overseas undergo a multitude of stress which can lead to mental illnesses as well as drug and alcohol abuse.

According to the National Institute on Drug Abuse, mental illness within the military is a major concern. Clinicians have found that around 40 percent of stationed soldiers and 20 percent of active soldiers are requiring mental health treatment. It has also been identified that drug and alcohol is commonly seen in military personnel who are suffering from mental health problems and is seen in a large portion of suicide deaths and suicide attempts in the military. 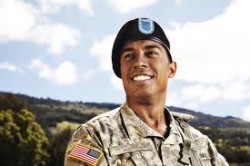 Military personal can access numerous treatment options through their health care coverage. TRICARE is the health insurance provider that military personnel are under and they offer mental health care and depending on the coverage should cover expenses for outpatient drug or alcohol treatment.

If an individual has been out of the military for a while and no longer is covered by their insurance they should look at other treatment options available in their communities because there are an abundance of drug and alcohol treatment facilities that are of little to no cost to people who need help. In addition, any person who served in the military can contact the military crisis line at 1-800-273-8255 or visit their website and chat live with a person who will be able to direct them to the best place for them to receive help for their problem.

Fighting for a country and seeing, experiencing, and living in conflict can be hard for military personnel to live with and not let it affect them. Getting treatment for a mental health issue or for a drug and alcohol issue is not a sign of weakness but a means to fix a problem that could lead to a life full of regret and health problems. If a person is an active duty member or is still covered by TRICARE and they are experiencing mental health problems, they should visit their website or call TRICARE to figure out what options they have available to them and when they can start receiving treatment.

Drug Addiction Intervention: The Steps to Saving a Loved One

Drug addiction is a disease plagued by chronic relapse and an array of serious side effects. When a family member or loved one is addicted, and you’ve tried to get them to seek help, an intervention may be the only safe, solid solution to the problem. Denial is often an interfering factor for those who….

Twice as many calls are made to ChildLine by young people concerned about their parents’ harmful drinking in Scotland than the rest of the UK. More than 230 Scottish children called ChildLine with their fears last year, according to a study. The majority of youngsters reporting concerns about their parents’ drinking also talked about physical….