How Does Heroin Addiction Begin & When Does it End?

The Beginning of Heroin Addiction

Heroin is highly addictive and is one of the most abused drugs in America. Not only is heroin highly addictive but it also creates rapid dependency levels to form in a person and a person’s body develops tolerance levels quickly to the drug. Due to all of these factors a person will have numerous problems occur once they begin using and abusing heroin.

Heroin is created from morphine and people who use heroin experience intense euphoria while feeling utterly sedated and relaxed. The pleasure that a person receives from heroin is the highest on their first use, which is why many people form addictions to heroin after the first use. Every use after the first use will be spent trying to receive that initial high they first felt when they took heroin.

According to the National Institute of Drug Abuse, heroin produces intense degrees of tolerance and physical dependence in a person that are powerful motivational factors for people to  compulsively use and abuse heroin. In addition, heroin abusers will begin to spend more and more time and energy obtaining and using the drug as time continues. Once a person is addicted to heroin their primary focus in life will become finding and using heroin. Heroin will change and alter their brain’s chemicals and their behavior causing numerous problems to occur.

The End of Heroin Addiction 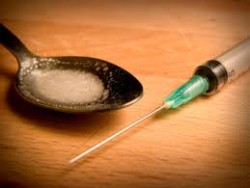 A heroin habit is easy to start, but very, very difficult to stop.

A person’s heroin addiction will come to an end at some point and unfortunately, no matter the ending it will most likely be unpleasant. Given heroin’s highly dependent tendencies and high abuse tendency, a person coming off of heroin will have intense withdrawal symptoms that will include both physical and mental symptoms.

Different ways that a person may stop taking heroin can include…

Heroin is a dangerous drug for a person to take and especially abuse and most assuredly it will lead to a person having health problems if they do not get help for their addiction.

A Generation of Victorian teenagers are drinking themselves into oblivion, with more than a quarter of 15-year-olds bingeing until they black out – the point at which brain damage is likely to occur. Research has also found that more than a third of 11-year-old boys have consumed alcohol. The figures, contained in a study by….

The Rev. Joseph C. Martin, a recovering alcoholic and an international leader in the fight against alcoholism and substance abuse who was a co-founder of Father Martin’s Ashley, a Harford County treatment center, died early today of heart disease at his Havre de Grace home. He was 84. Father Martin’s “Chalk Talk on Alcohol” and….

‘One night can affect the rest of your future’

There’s a calendar Bill’s friends at school keep, but it doesn’t have exam dates or football games on it. “We mark our calendars every time we find out someone’s parents are going to be out of town,” the 17-year-old Sandburg High School senior said. That’s when 10, 20, 50 kids descend on the house with….

Once a person’s body becomes accustomed to large amounts of alcohol on a daily basis, the brain and body cannot function normally without alcohol in the system. This condition can develop in matter of weeks in cases of frequent binge drinking or when consuming large quantities on a daily basis. Under these conditions, cutting back….

Whether drinking alcohol helps or hurts your chances of avoiding heart disease and stroke may depend on your gender as well as how much you imbibe, a new study finds. The report, which appears online July 11 in the journal Stroke, looked at the drinking habits and lifestyles of more than 80,000 Japanese men and….