“Posttraumatic Stress Disorder (PTSD) is an anxiety disorder that can occur after you have been through a traumatic event. A traumatic event is something horrible and scary that you see or that happens to you. During this type of event, you think that your life or others’ lives are in danger. You may feel afraid or feel that you have no control over what is happening.” (WebMD) 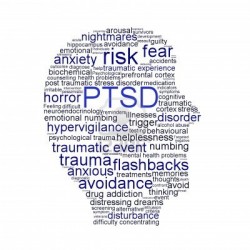 PTSD is a type of mental health disorder that is caused by a traumatic event.

Fort Wayne anesthesiologist William Pond, M.D., knows soldiers bring a part of war home with them. He sees first hand how the effects of war can impact the whole family.

Dr. Pond, a colonel in the Air National Guard, has served four tours in Iraq. He believes physicians can help returning troops and their families by being aware of the psychiatric disorders they may suffer. A Rand Corporation study released last April revealed nearly 20 percent of returning soldiers reported symptoms of PTSD, but only half sought treatment. Soldiers who did seek help for PTSD or major depression received minimally adequate treatment for their illnesses, according to researchers. Those who did not seek help said they were concerned that it would threaten their military careers. (ismanet.com)

Early treatment is better because symptoms of PTSD may get worse. Dealing with them now might help stop them from getting worse in the future.

Symptoms of intrusive memories may include:

Symptoms of anxiety and increased emotional arousal may include:

Treatment that combines sertraline and naltrexone appears to be superior to treatment with either drug alone, as well as to placebo, for individuals with depression and alcohol dependence. Patients receiving the combination treatment were more likely to achieve abstinence and had delayed relapse to heavy drinking, according to a report posted in the March 15….

Drug and alcohol abuse in your back yard

SANTA ANA Orange County spends some $40 million a year on running programs that prevent, treat and rehabilitate drug and alcohol abusers. And this year for the first time, the Health Care Agency published a public report that illustrates who is getting treatment, where they live and their poison of choice. The numbers even reflect….

Life with a 12-year-old alcoholic

Jane (not her real name) was faced with the shock discovery that her young son was drinking heavily when somebody knocked on her door to tell her he had collapsed in the street. At the age of 12, Alan, (not his real name) had drunk himself unconscious and was being revived by paramedics after attending….

When spirits fuel the muse: Examining alcoholism and madness in literature and film

Here’s a statistic you won’t pick up in English 101: Of eight native-born Americans awarded the Nobel Prize in Literature, five were alcoholics, including Sinclair Lewis and Eugene O’Neill. “Alcohol is a factor if not the central focus of the three top modern novelists – Hemingway, Faulkner and Fitzgerald,” says Michael Carolan, an M.F.A. candidate….