Is denial always part of the deal?

Maybe denial really IS just a river in Egypt. Lorraine T. Midanik, dean of the School of Social Welfare at the University of California in Berkeley, is convinced that the contemporary concept of denial as applied to alcoholism represents a weak link in the disease model of addiction.

Neither the founding fathers of Alcoholics Anonymous, nor the foremost early proponent of the disease model—E.M. Jellinek—specifically identified denial as a core concept of alcoholism, according to Midanik. In “The Philosophy of Denial in Alcohol Studies: Implications for Research,” which appears as a chapter in The Praeger International Collection on Addictions, Midanik highlights the conclusion that often results from making a strict association between alcoholism and denial: “There is no room in this perspective for truth telling from the drinker himself.”

The more often and the more energetically a drinker protests against the hypothesis that he is drinking alcoholically, the more telling the proof that the drinker is “in denial” and therefore incapable of rational decision-making about drinking. Clearly, this is exactly the case in many instances. Denial exists. However, Midanik argues that “the definition of denial in alcohol studies has been expanded well beyond its original meaning” to include a host of vaguely Freudian defense mechanisms, including hostility and other forms of negative behavior. Midanik, who is openly skeptical regarding many aspects of the disease model, complains that denial has been broadened into a catchall category “for any behavior that prevents the adoption of the disease model system.” 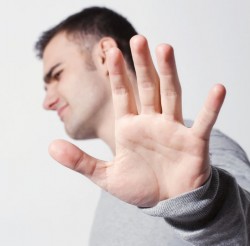 Don’t let denial be your excuse!

As the “disease model system” is often presented to patients in various rehab centers around the country, I would tend to agree. But Midanik also questions whether there really exists anything beyond what she labels “tactical denial,” meaning “deceptive maneuvers used by alcoholics to conceal the extent of their drinking.” In such cases, the drinker is obviously aware of what he or she is doing, so the more appropriate term might be “lying.” Nonetheless, I firmly believe that denial, in the sense of lack of self-awareness, or dissociation, is often an acute part of the presenting symptoms of alcoholism, if not quite the “central core of alcoholism treatment,” as Midanik sees it.

Midanik describes something like a cabal of interests helping to foster and inflate the denial concept—AA, Al-Anon, and various codependency groups in particular—even though “study after study and review after review report that alcoholics give valid self-reports….” Here Midanik is onto something interesting. As she intriguingly relates, the near-universal presumption guiding “interventions” or “structured encounters” with supposed alcoholics is that “there is a continuum with denial on one end and truth telling on the other. Overreporting rarely if ever exists.”

Yet overreporting is a well-known issue in clinical research. Midanik refers to the “hello-goodbye effect,” in which patients tend to overemphasize their symptoms when entering treatment, and to minimize them at the end of treatment. If new patients overreport their alcohol consumption, “there are important implications for treatment personnel who base treatment decisions on these self-reports.” Moreover, overreporting may also bias clinical studies “by inflating success rates (presuming there was an opposite bias after treatment). Yet despite the implications of these findings, little interest has been shown by researchers in the alcohol field to explore this area.”

I Was – I am – an alcoholic, now in recovery. I come from a good family, but when I was 15 my parents went through a very bitter split and I couldn’t handle it – my whole support network and the life I had went out of the window. I couldn’t understand, so I….

Alcoholic turns to faith for help

John Baker is a quiet, unassuming man. When he says he deserves no credit for starting Celebrate Recovery, a Christian 12-step program now in 12,000 churches, he means it. Baker, who is in Tulsa this weekend for a Celebrate Recovery leadership training seminar, was raised in a Christian home and said he accepted Christ when….

Just as governments in Australia and Britain are on the brink of introducing new measures to combat alcohol abuse and binge drinking, new research says that campaigns warning about the harmful effect of excessive alcohol consumption don’t work. The researchers say they fail to work because they are widely ignored, in particular by young people….

Drug and alcohol rehab strategies to be revamped

Ministers battling to beat Scotland’s addiction to drink and drugs will unveil a radical shake-up of rehabilitation today. They are to disband Scotland’s 11 Alcohol and Drug Action Teams and create 32 local authority teams. Following a damning critique of efforts to reduce the harm caused by alcohol and drugs by Audit Scotland last month,….