Does your child get drunk? How do you know? Do anyone else’s kids drink? Think it can’t happen to you? Maybe you don’t have adolescent children, but you drive on the roads here. Do you want a drunken teenager coming at you in the left lane? This is your issue too.

Every day 4,500 young people under the age of 16 take their first drink. Obviously, there are a lot of great kids who don’t do this. But for many, it becomes a real problem. One thousand seven hundred college students die each year of alcohol-related causes — far more than drug-related deaths. Adolescents who start to drink before they are 18 are four times more likely to end up alcohol-dependent than if they had waited until the legal drinking age of 21. 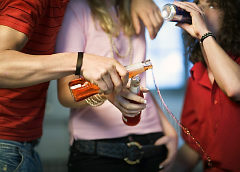 There has been a cultural shift for young people and booze. Increasingly kids are taking their first drink as young as 9 or 10 years old. Their attitudes seem more aggressive, with the goal being not to drink, but to get drunk. On some campuses, college drinking is out of control.

They learn it early. Advertising on billboards and in magazines makes drinking look benign, casual, sexy, and cool. Gas stations have turned into minimarts, selling beer and liquor made to taste like lemonade. Alcohol brands’ sponsorship of pro sports, rock concerts, golf, and Nascar has exploded. Every outdoor event and parade now has a beer tent. Even the mundane parking lot has become a mecca for aggressive alcohol tailgating. It teaches our children lessons.

The number-one place teenagers get alcohol is at home. Sometimes older friends or siblings buy it for them. And sometimes parents give it to them. With continued use, alcohol damages the memory and reasoning parts of the brain. It impairs judgment, injures the liver and stomach. Some of this can’t be reversed.

This is not just an individual issue, it’s a community issue. Some widely held attitudes can contribute to the problem. Here are examples.

There are mistakes here. If you condone any drinking by young people, a significant number of these kids will go on to have a problem as they get older. You are just helping that young person become an alcoholic.

You do not have the legal right to do whatever you want in your own home. Serving alcohol to an under-age adolescent in your home is illegal. If a police officer catches you, he or she has the duty to write you a summons.

Lt. Francis Mott of the East Hampton Town police has been a leader in the prevention of teenage drinking. Many nights that he is on duty, he and other officers receive calls complaining of parties that are out of control. It is not unusual for him to arrive at a party to find teenagers unconscious on the lawn. He often has to call for an ambulance. Sometimes he has to make arrests at the scene.

If your teenager is drunk at a party, he or she will be given a court summons. If the police catch you with under-age young people drinking at your house, you will be showing up at court. Judges evidently don’t like this sort of thing.

Officer Fred (Rocky) Notel of the East Hampton Village police is trained to teach the Drug Abuse Resistance Education program, or DARE. He told me that just three weeks ago village police sent minors into every bar in East Hampton to try to get a drink. Only one establishment served a minor. Though Officer Notel felt this was a pretty good outcome, he knows that most of the problem is not in the bars.

If you discover that your teenager is drinking, Officer Notel recommends that you start with the counselors at your child’s school. Edna Steck, the director of the East Hampton Town Human Services Department, told me her team can help evaluate an at-risk child, as can the Family Service League and Phoenix House. These are resources to help you.

The Failed War on Drugs in Latin America. Could Decriminalization Be the Answer?

The massacre in Ciudad Juarez at the end of January made it clear that Mexico is losing the war on drugs. Narcotics-related violence is on the rise in other Latin American cities as well. An increasing number of voices are demanding that drugs be decriminalized. The killers arrived in four or five SUVs. They quickly….

Binge drinking is often associated with many health risks including sexually transmitted diseases and alcohol poisoning. While it’s been proven that drinking alcohol in moderation can be good for your health, that is not the case when it comes to binge drinking. FACC Cardiologist Dr. Lynn Einbinder says binge drinking is usually defined as having….