Getting your fix at the doctor’s office

A group of Canadian researchers has demonstrated the truth of a practice commonly used in European countries like The Netherlands and Switzerland: Heroin can be an effective treatment for chronic, relapsing heroin addicts. Published in the New England Journal of Medicine, the study is “the first rigorous test of the approach performed in North America,” according to a New York Times article by Benedict Carey.

Using doctor-prescribed heroin has two advantages, some researchers believe. It gets around the problem of addicts who don’t like the effect of methadone and therefore don’t take it as prescribed. Moreover, as European countries have demonstrated, it brings treatment-resistant opiate addicts into regular contact with physicians and medical treatment professionals, thereby keeping them away from drug dealers and out of jail. 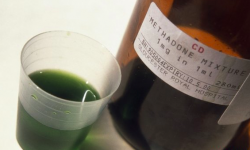 The downside is equally obvious. It keeps addicts hooked on heroin, and may even exacerbate their addiction by providing a higher quality drug. Furthermore, it runs against the prevailing North American notion that heroin should be illegal, period. Certainly, doctors have no business prescribing it to active addicts, critics argue. Furthermore, the risk of overdose or seizure is always present.

According to senior author Martin Schechter of the University of British Columbia’s School of Population and Public Health, as quoted in the New York Times: “The main finding is that for this group that is generally written off, both methadone and prescription heroin can provide real benefits.”

In an editorial accompanying the journal article, Virginia Berridge of the London School of Hygiene and Tropical Medicine cautioned that “the rise and fall of methods of treatment in this controversial area owe their rationale to evidence, but they also often owe more to the politics of the situation.”

At the end of the 19th Century in America, opium was widely prescribed as a cure for alcoholism. For opium addiction, the treatment was often alcohol.

‘Teach’ over fives about alcohol

A whisky expert has called for children aged five and over to be “educated” about alcohol in a bid to combat its misuse. Whyte and Mackay master blender Richard Paterson said it was important to shape children’s behaviour around alcohol from a young age. Mr Paterson said:”We need to talk to young people about the….

Many people who suffer from a drug or alcohol addiction also suffer from a mental illness. According to www.nami.org, it is generally agreed that as much as 50 percent of the mentally ill population also has a substance abuse problem. The drug most commonly used is alcohol, followed by marijuana and cocaine. Prescription drugs such….

In Montana, underage drinking is often thought of as a “rite of passage” that every teen goes through. It is seen as a harmless pastime. The exact opposite is true; this “harmless pastime” contributes to more deaths among our youth than any other preventable cause. Recent studies in brain development show that the human brain….