How to keep teens from drinking during the holidays

Resources and tips can keep teenagers safe and sober

With school out for holiday break, some teens may be tempted to turn to parties and alcohol for entertainment. As the demands and distractions of the holiday season approach, it is important for parents to be aware of the dangers of underage drinking.

Underage drinking exacts both tragic consequences that make headlines and destructive outcomes that don’t. Many teens don’t drink alcohol; however, Shasta County teens say that for those who do, the primary setting is at home or a friend’s home.

Alarmingly, among cities in California with a population between 50,000 and l00,000, Redding ranked first in 2007 in injury and fatal crashes involving drivers younger than 2l who had been drinking. 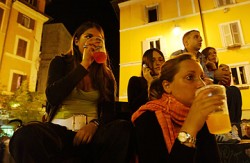 Teen drinking can damage areas of the developing brain that shape memory, learning, impulse control, reasoning and decision-making. Twenty percent of the alcohol consumed in the United States today is consumed by underage drinkers.

More than 90 percent of that alcohol is consumed in “binge drinking” – five or more drinks in a few hours. This type of drinking also increases risk of injury and death, sexual assault and other violence, as well as alcohol dependence. It increases the risk of high blood pressure, some mental illnesses and liver disease.

Alcohol plays a key role in accidents (including vehicle crashes, drownings and falls) as well as homicides and suicides, which are the leading causes of death among youth.

With so many serious consequences, parents may want to consider taking steps to protect their children during unsupervised time.

First and most importantly, talk to your teen about alcohol. Do not assume they know how destructive it is or what your expectations are.

Know what alcohol you have in your home, and keep it locked.

Do not leave teens home alone overnight. Have your child stay with a family member or family friend if you need to be away.

When it’s an option, have family, friends or neighbors check in on your teens during the day if you are working.

When your teenager is invited to a friend’s home, check with the parents to ensure they have rules about not drinking.

And finally, have your teen call you from a landline instead of a cell phone when he or she are at someone else’s home.

Despite what parents might think, teens do value their advice and involvement.

Michelle Gazzigli is a member of the Shasta County Alcohol and Drug Advisory Board.

The 2007 Youth Risk Behavior Survey5 found that among high school students, during the past 30 days:

45 percent drank some amount of alcohol.

29 percent rode with a driver who had been drinking alcohol.

Youths who drink alcohol are more likely to experience the following:

School problems, such as higher absence and poor or failing grades.

Social problems, such as fighting and lack of participation in youth activities.

Legal problems, such as arrest for driving or physically hurting someone while drunk.

Physical problems, such as hangovers or illnesses.

Higher risk for suicide and homicide.

Alcohol-related car crashes and other unintentional injuries, such as burns, falls and drowning.

Abuse of other drugs.

Changes in brain development that may have life-long effects.

Youths who start drinking before age 15 years are five times more likely to develop alcohol dependence or abuse later in life than those who begin drinking at or after age 21.

With their drinking problems behind them, studies show recovered alcoholics may still face social disorders or deficits. According to ABC News, a recent Boston-based study by the National Institute on Alcohol Abuse and Alcoholism and the U.S. Department of Veterans Affairs compared the brain function of a group of former alcoholics with the brain function….

It is the need of today’s individual to remain in perfect appealing shape. The mindset of an individual is inclining more towards his appearance rather than his health. The people with wide waist dimensions are laughed at and those with thin and perfect features are appreciated. This social pressure has made an individual fall pray….

The language of intoxication: The term 'drunk' doesn't really cut it any more

The language that drinkers typically use to describe alcohol’s effects on them are quite different from the language used by alcohol researchers, no doubt limiting researchers’ understanding of self-reported alcohol use. New findings show that researchers could do well to tap into a wide spectrum of terms used by drinkers to describe their levels of….