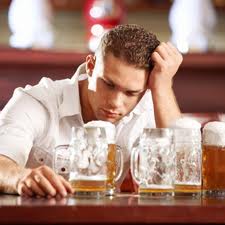 Life-saving surgery to prevent repeated severe bleeding from ruptured veins in the esophagus or upper stomach may not induce some patients with alcoholic liver disease to stop drinking alcohol, researchers report.

Such a surgical procedure may be necessary to reduce the pressure in the veins of the esophagus and upper stomach among patients with cirrhosis, a scarring of the liver frequently caused by alcohol abuse.

The study group consisted of 132 patients with cirrhosis, including 78 with alcoholic liver disease, lead author Dr. Michael R. Lucey, of the University of Wisconsin School of Medicine and Public Health, and colleagues report.

The investigators used patient and family member interviews to determine drinking patterns among 132 cirrhosis patients with who had surgically implanted shunts to reduce the pressure in their esophageal and upper stomach veins.

The patients with alcoholic liver disease were twice as likely to drink alcohol during follow-up as patients with cirrhosis from other causes.

Continued alcohol use among patient with alcoholic liver disease was associated with a 153 percent increase in gamma-glutamyl transpeptidase (GGT), a liver enzyme indicative of liver disease. These patients also had a significantly increased risk repeat hemorrhage and death.

Lucey and colleagues conclude that a “substantial minority” of patients will return to drinking alcohol after experiencing a life-threatening complication. They recommend that patients with alcoholic liver disease should be encouraged to abstain from alcohol.
____________
source: American Journal of Gastroenterology

Debbie Allen felt sick when she heard about the death of 15-year-old Sarah Botill after a night of drinking Dec. 5 at a weekend sleepover in Gilroy. Her daughter, Shelby Lyn, died under eerily similar circumstances Dec. 19 last year in Redding. Like Sarah, Shelby Lyn Allen, 17, was drinking with two friends late at….

The government’s top medical adviser has drawn up plans for a minimum price for alcohol which would double the cost of some drinks in England. Under the proposal from Sir Liam Donaldson, it has been reported that no drinks could be sold for less than 50 pence per unit of alcohol they contain. It would….

Drug abuse involves the repeated and excessive use of drugs. Drug abuse today is a major cause for concern and has evil effect on society. Teens constitute a large segment of drug abusers, adults also surrender to drug abuse. Middle-aged people are more prone to abuse prescription drugs. The drug addiction affects the brain and….