It is a long-observed conclusion that many people with substance abuse problems also have mental health issues. The debate often rests on whether or not one causes the other and if treatment of one can make the other disappear. This can be a heated topic, as some experts insist on treating both as co-occurring disorders, while others may feel that the mental illness symptoms will can go away when the substance abuse is halted. Frankly, there is evidence to support both theories and practices, and to try and stick all people who display such symptoms into one category or another is a wholesale injustice to those needing help. The treatment should be specific to the individual. 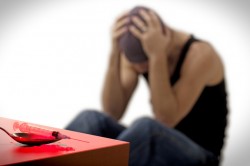 This pattern was similar for most specific types of illicit drug use, including the use of marijuana, cocaine, hallucinogens, inhalants, or heroin and the non-medical use of prescription drugs. Only alcohol use had a smaller margin of difference, but the rate was still higher among those diagnosed with any mental illness. This was observed for both binge drinking and heavy alcohol use.

Overall, 42 percent of the 19 million adults who had a substance use disorder in the past year also had a co-occurring mental illness, whereas only 18 percent were diagnosed with any form of mental illness who did not have a substance use disorder. Turned round the other way, 17 percent of those diagnosed with a mental disorder also met the criteria for substance abuse dependence or abuse, while only 6 percent did for those with no mental diagnosis.

While these numbers certainly are not conclusive of the theories regarding which comes first or how they should be treated, they do paint a clear picture of the fact that mental illness and substance abuse are common traits among each other. When seeking a rehab center for substance abuse, find out if they also treat co-occurring disorders and if so, what are their treatment methods. Hopefully finding the least invasive therapies will work and the more severe treatments will not be needed.

Hallucinogen’s Popularity May Thwart Medical Use

With a friend videotaping, 27-year-old Christopher Lenzini of Dallas took a hit of Salvia divinorum, regarded as the world’s most potent hallucinogenic herb, and soon began to imagine, he said, that he was in a boat with little green men. Mr. Lenzini quickly collapsed to the floor and dissolved into convulsive laughter. When he posted….

Sobriety leads to new role as a guide

Marilu Thornburgh’s outgoing personality has been built upon a survivor’s instinct. There was a time when her world was perilously close to collapse. A time when co-dependency and her subsequent descent into alcoholism prevailed. But Thornburgh did survive, she got help to overcome her problems and has been sober since the 1990s. Now she readily….

If you’ve never planned an alcohol treatment intervention before or sometimes even if you have planned such an intervention before it can be very overwhelming and difficult. You are worried about your loved one and you only want what’s best for them but at the same time you’ve got a thousand things going through your….