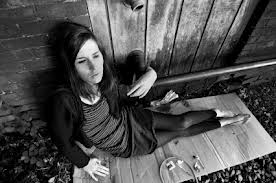 When the vomiting, tremors, and chills she felt each morning became overwhelming, Jessica Polmann started selling her body to finance her heroin addiction and halt the debilitating physical symptoms of withdrawal. The petite, blond cheerleader, who made the honor roll before she started doing heroin at age 13, received $60 and some cigarettes each time she had sex with a man in his 50s who lived near her suburban New Jersey home. Jessica also traded sex for drugs with her dealers and male friends if they had extra bags of dope.

She even introduced her friends and boyfriend to heroin to expand the pool of people she could call on to pick up more drugs. “I was,” she says now, “really disgusting.”

Polmann, now 18, is just one in a wave of teens and 20-somethings in suburbs across the Northeast who are becoming addicted to and dying from abuse of heroin and prescription opiates like OxyContin. Once prevalent mostly in big cities, heroin has been spreading out to smaller towns in New England and the mid-Atlantic as the drug is becoming more widely available in a highly pure, inexpensive form that can be snorted. Many of these young addicts get started on prescription drugs, move on to cheap heroin that can be snorted, and end up injecting it for a more potent high. Either way, the effects have been deadly. In Massachusetts, for example, the number of opiate-related deaths, which include overdoses and fatal drug interactions, among people ages 13 to 30 was five times as great in 2006 as it was in 1997. And according to drug intelligence, law enforcement, and treatment officials at both the federal and state level, the trend has not yet shown signs of reversing or slowing down.

New markets. Heroin has been available in the Northeast’s inner cities for a long time, in part because much of it is funneled through well-worn trafficking routes like New York’s busy airports. Five years ago, the National Drug Intelligence Center noted in its annual report that heroin was just beginning to move into the suburbs, but it concluded that the drug’s popularity was stable or even declining. By 2008, the NDIC’s National Drug Threat Assessment, which is based on interviews with local law enforcement and public-health officials across the country, struck a very different tone, warning that heroin abuse “is increasing among young adults in a number of suburban and rural areas.” Low-level dealers had found the suburbs could be quite lucrative because they could more easily monopolize the local heroin market.

The 2009 report has not yet been released, but Allison Stombaugh, an intelligence analyst for the NDIC, says it will cover the growing threat of prescription opiates. She adds that prescription drug abusers often graduate to heroin within a few years, suggesting that heroin abuse could rise even more in the near future. “Prescription opiates are seen as acceptable because they are doctor prescribed. But abusing them to get high frequently leads users to try heroin,” Stombaugh says.

Douglas Collier, a Drug Enforcement Administration agent in New Jersey, has seen the risks firsthand. He worries that parents in these suburban areas don’t realize how frequently prescription opiate abuse is leading to heroin. An annual survey by the U.S. Department of Health and Human Services found that 2.1 million people ages 12 or older who tried an illicit drug for the first time in 2007 chose prescription pain relievers, 57,000 more than the number who tried marijuana. Collier frequently meets with groups of parents to discuss these risks. When he asks audience members whether they lock their liquor cabinets before leaving the house, Collier sees a sea of raised hands. But when he asks how many lock their medicine cabinets, he often sees just a single hand.

“A mother approached me after one of these presentations, weeping,” Collier says. “She said, ‘I couldn’t figure out why my kids were visiting my mom, who had been diagnosed with stage three cancer and prescribed Fentanyl and OxyContin for her pain. But then a bell starting ringing in my head during your presentation, and I connected the dots. I realized my kids were visiting their grandma every day to steal her medication and get high,’ ” Collier says. The mother later told him that her teenage daughter had overdosed on the stolen prescription opiates but that she survived.

David L’Esperance, the police chief of Salisbury, a coastal Massachusetts town where heroin and prescription opiate abuse is extensive, endured an even more painful trauma. His son died of a methadone overdose a year and a half ago. For L’Esperance, who spent most of his career working on a drug task force, the loss was particularly painful. “Salisbury is a hardworking, middle-class community with an excellent school system and great people, but we also have a problem with painkillers and heroin, and we recognize it,” L’Esperance says. “Kids are into this stuff, and hell, if it can happen to the police chief, it can happen to anyone.”

Last year, Salisbury and the surrounding beach communities lost at least six people to opiate overdoses, according to L’Esperance. Across Massachusetts, 149 teenagers and 20-somethings died from opiate use in 2006. Unsurprisingly, the number of heroin addicts entering state-operated drug treatment programs also increased over the same period. Indeed, the gap between the number of addicts entering state facilities to treat heroin addiction and the larger number seeking treatment for alcohol abuse shrank dramatically, from 21 percentage points to only 5.

No stigma. The frequency with which prescription opiate abusers switch to heroin, a drug that is arguably more likely to result in fatal overdoses, does not surprise Michael Botticelli, director of the Massachusetts Bureau of Substance Abuse Services. He says that when OxyContin users exhaust their finances or opportunities to steal from medicine cabinets, they become shrewd consumers. They can either purchase a single OxyContin pill for up to $80 or spend as little as $5 on a bag with one tenth of a gram of heroin. Both options offer a comparable high, and because heroin no longer carries the stigma of a drug that users must inject, the decision to graduate to heroin is an all-too-easy one, Botticelli says.

Though Massachusetts and other northeastern states have not yet seen a decline in the number of young people addicted to and dying from opiate addictions, Botticelli is hopeful that strategies he helped implement this year to address the problem will soon provide some relief. In January, the bureau launched a program to train addicts and their relatives on how to administer nasal Narcan, a drug commonly used by first responders to reverse the effects of an opiate overdose. To deter more people from developing opiate addictions, the bureau also distributed $2 million among the 15 Massachusetts communities with the highest incidences of opiate overdoses. The money will fund prevention strategies that each town must devise.

Law enforcement and treatment officials in New Jersey agree that education about their state’s heroin and prescription opiate problem is the best way to prevent more young adults from losing their lives. Between 2004 and 2007, the number of opiate-related deaths per year in New Jersey rose from 129 to 173. In 2006, the annual number of deaths hit 215 when a rash of addicts died from using heroin cut with Fentanyl, a synthetic opiate more powerful than morphine. One of the young adults who lost her life that year was a friend of Polmann’s. In total, Polmann lost seven of her school friends during her five years addicted to heroin.

Polmann now lives at Daytop, a drug rehabilitation and treatment facility in northern New Jersey, and she has been clean for nearly five months. She has made significant strides in repairing what were once broken relationships with her family and even has plans to go to college and join the Army, accomplishments that were seemingly beyond her reach earlier this year. “When I came to Daytop on June 23, I walked in here with my face yellow, tracks up and down my arms, saying f— this,” she says. “Now that I’m in the program, I love it. I love being clean, and never in a million years did I ever think I would say that.”

But she is never far from reminders of her life as an addict. An album she keeps in her bedroom at Daytop is filled with photos of her former friends. Some have died or gone to prison while others have attempted suicide or contracted diseases through their IV drug use. The first photo in the album shows Jessica in a vibrant green front yard wearing a silky, white dress and preparing to leave for her middle school dance. She had snorted heroin earlier that night and was high when the photo was taken.

Colombia’s drug barons used to favour high-speed powerboats to export their deadly cargos, leading law enforcers on high-speed chases as they swamped America with narcotics. Now, in an attempt to evade American surveillance, they are diverting their smuggling trade beneath the waves. Coast Guard and military patrols have reported a dramatic increase in do-it-yourself “semi-submersible”….

Wealthy and professional women are far more likely to binge drink than those on lower incomes, a new survey of Scotland’s health has suggested. Official figures showed 31 per cent of females in homes with the highest earners drink more than the recommended limit of 14 units per week, the equivalent of seven pints of….

Women who drink the same amount as men may not be found as attractive as they think, a recent psychology study says. A March 9 report by the American Psychology Association said an increasing amount of women think they should drink excessively to impress men. Surveys conducted showed 71 percent of college women think men….

Healthy parent-child ties can keep teenagers away from alcohol

Study Finds that Most Addicts are Not Receiving the Best Treatment

Anyone who has dealt closely with addiction knows that it is a terrible disease. Those who live with addiction struggle with temptation, shame and guilt as a result of their addiction to a point in which is totally disrupts any chance at a normal lifestyle. Treatment for addiction is based on medical approaches, scientific advancements….