Drug abuse is one of society’s oldest problems. It seems that the problem grows and grows, especially due to the fact that the number of substances of abuse has also risen and continues to rise. Understanding these drug abuse statistics can help you to understand the scope of America’s drug problem.

1. Almost 40% of Admissions into Drug Abuse Treatment are for the Combination of Alcohol and Drugs

According to SAMHSA, “730,228 substance abuse treatment admissions (37.2 percent) reported abuse of alcohol and at least one other drug.” This is very troubling, as alcohol can often exacerbate the side effects of prescription drugs, and it “tends to be ingested in greater quantities” when used with other drugs.

2. Nearly Half of All Drug-Related Emergency Department Visits are Associated with Abuse

The NCJRS states that there were “more than 5.1 million total drug-related ED visits” in 2013. 2.5 million were caused by or associated with “drug misuse or abuse.”

3. Opiate Abuse Believed to Occur in 9% of the Population

9% of the US population are believed “to misuse opiates over the course of their lifetime” (NLM). This could mean anything from heroin, to morphine, to prescription opiates like OxyContin and Percodan. 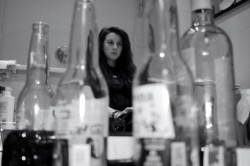 Many people begin using drugs and alcohol as teenagers.

In 2012, the NIDA surveyed high school students, finding that 14.8% of seniors took prescription drugs “for nonmedical reasons.” This also includes the abuse of drugs that were not even prescribed to the teen.

The NIDA states that “1.2 million Americans are living with HIV-and one in five of them does not know it.” As “behaviors associated with drug abuse are among the main factors in the spread of HIV infection in the United States,” the danger of HIV/AIDS rises greatly when a person is abusing drugs and sharing needles with other individuals.

According to SAMHSA, “in 2012, an estimated 2.0 million persons… used an illicit drug for the first time within the past 12 months.” The average states that 7,900 people are initiated into drug abuse every day.

The NIDA goes on to confirm that “half (52 per-cent)” of drug abuse initiates in 2012 “were under 18.” The risk of drug abuse is greater for teens than it is for the general population, and the longer a person abuses drugs, the harder it is to stop.

8. Military Service Members Have a Higher Rate of Prescription Drug Abuse than Other Citizens

“11 percent of service members reported misusing prescription drugs” in 2008, which is higher than use of illegal drugs among the same group (NIDA). This often happens because of the zero tolerance policy in the military for illegal drugs and the opioid painkillers that are widely prescribed to them.

9. Drug Overdose Kills 105 People Every Day in the US

These numbers (38,329 a year) are higher than the deaths caused by falling, guns, and traffic accidents (NIDA). Overdose is always a possibility when abusing drugs and is not just a risk for those who relapse.

10. Almost All Drug Abusers are Unaware of Their Problem

From a study conducted in 2005, the HHS states that “almost 95 percent of people with substance use problems are considered unaware of their problem.” As most drug abuse requires medical treatment, therapy, and lots of work, many people will experience harmful results as they remain unaware of how bad things are.

Alarm over the child drinkers with liver disease

Shops and supermarkets could face new legal curbs on the sale of cut-price alcohol in an attempt to control rising levels of under-age and binge drinking. An audit commissioned by the Home Office has found widespread abuse by drinks retailers of voluntary codes of practice intended to prevent alcohol abuse. The conclusion of the study,….

It's all about drugs, say local authorities

Drugs are the common thread running through the most extreme crimes in the Poconos. According to court records, drugs permeated the life of Steven Santillo for years. Last week a motorist found Santillo shot dead at the intersection of Hypsie Gap and Laurel roads in Chestnuthill Township. State police have accused Fritz Gerald Dejoie, 21,….

Treatment & Education is the Greatest Fight on War Against Drugs

Since the early 1970s, the War on Drugs has officially cost American taxpayers more than a trillion dollars! It is estimated that as many as two percent of the entire United States population is in prison and many of them are service sentences for drug related offenses. Still thousands more have died as a result….

Stressed Diggers turning to alcohol on return from front line

ALCOHOL has become the treatment of choice for an unfortunate number of Australian troops left traumatised by their service in East Timor, Afghanistan and Iraq. Taxpayers are now funding rehabilitation and sometimes compensation for their addiction, not to mention attempts to break it, as troops return from mostly dry operations to deal with their problems….