The young people of the 21st century encounter life situations, pressures and temptations unlike any other generation before them. These experiences coupled with the volatile hormonal changes taking place in teens make for a population highly susceptible to substance abuse issues.

Youth substance abuse rates remain a cause for concern among parents, teachers and communities alike. While most anyone can fall victim to substance abuse, certain risk factors make young people particularly susceptible. At a certain point, signs and

symptoms make it necessary for parents to get help for a teen’s drug addiction problem. Without needed help, the likelihood a teen will grow up to be a drug addicted adult increases considerably. 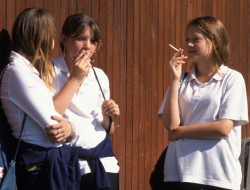 The American youth have been known to use drugs more and more.

While teens have access to a host of different drugs, both legal and illegal, marijuana usage rates continue to rise from year to year. According to the National Institute on Drug Abuse, rates of marijuana use among teens have continued to increase since the year 2000. As of 2007, rates of marijuana use increased among 10th and 12th graders by 14.2 and 18.2 percent respectively. Reported daily usage rates have also increased from 5.1 to 6.5 percent between the years 2007 and 2012.

While a drug abuse problem is itself cause for concern, the especially damaging effects of drugs on a teen’s development process can have long-reaching consequences in his or her life. Most all types of addictive drugs interact with vital brain chemical processes. Over time, drug effects can actually alter brain structures and functions in permanent ways, especially in young people.

Since a certain degree of brain development takes place during teenage years, drug effects can cause long-term, if not permanent alterations to develop, many of which stay with a teen on into adulthood. In other words, the sooner a teen gets help for a drug abuse problem the better.

While there’s no one cause of teen drug abuse problems, drug habits do develop over time with certain risk factors making teens more susceptible to substance abuse. According to the American Association for Marriage and Family Therapy, certain characteristics and/or lifestyles may place some teens at an increased risk, some of which include:

The home environment also has a considerable influence on a teen’s sense of self and the world around them. Homes lacking needed supervision, discipline and communication deprive teens of the types of support and guidance needed to manage everyday life issues. Without these provisions in place, poor coping behaviors, such as substance abuse can easily develop in a teen’s life.

When to Get Help

Problem signs to look out for include:

While teens do go through passing phases, substance abuse behaviors should be taken seriously before said behaviors turn into addiction problems.

Going to Alcoholics Anonymous meetings could help with depression

Participants at Alcoholics Anonymous (AA) could benefit from alleviation of depression according to new findings. Individuals who attended Alcoholics Anonymous meeting more frequently not only drank less, but also had fewer symptoms of depression. John F. Kelly, PhD, associate director of the Massachusetts General Hospital (MGH) Center for Addiction Medicine says the study is the….

Alcohol has again outstripped illicit drugs like heroin and ice as the number one reason for admissions at a major Australian rehab service. Problem drinking topped Odyssey House’s 2009 admission list, because 26 per cent of those seeking care over the year named it as their “principal drug of concern”. It was fractionally down from….

Irish people spend almost three and a half times more of their income on alcohol than the European average, an EU-wide survey reveals. A study on household expenditure across the 27 EU member states highlights how Irish consumers are the biggest spenders in Europe on alcohol by a long distance. It estimates that more than….