Amina is 35 years old. She is married and has six children. She is also addicted to heroin.

A housewife from Herat Province in Afghanistan, Amina started using drugs at the age of 10, when she was working as a carpet weaver. The job was strenuous and her workmates advised her to use opium to get relief from the tiredness.

“Initially, I rubbed opium into my joints and muscles. After that, I ingested opium for seven years, then moved to smoking heroin as the opium wasn’t satisfying me anymore. Finally, I started injecting heroin,” she says. After some time Amina wanted to take larger doses and to use more “effective” methods. “When I was not taking drugs, I felt bad, so I continued taking them, and slowly went from smoking to injecting,” she adds.

Her relationship with her extended family soured with her continued drug use. “I made every effort to hide my addiction from neighbours. My children frequently asked me to quit. Our relatives stopped talking to us,” she says.

Amina says that she has had severe mental and physical problems in the years she has been addicted to drugs. People have discriminated against her. 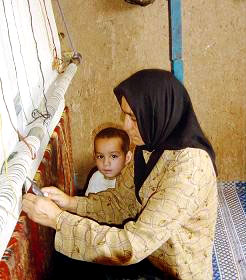 She did not know where to find help until the social workers from the Ministry of Public Health of Afghanistan visited her. They explained to her about the mental, social and financial harm her continued drug use was causing. This was a turning point for her.

“I felt that I had to make a tough decision to start a new life. They gave me clean syringes to use to avoid infection. I also received personal and family counselling. Now, I am not injecting anymore; I have shifted to smoking and hopefully I will quit soon,” she explains.

She is unhappy, however, about the fact that her two young daughters have taken up carpet weaving to help supplement the family income and is afraid that they too will become hooked on drugs. Unfortunately, since she cannot weave carpets anymore due to the physical effects of her long-term drug addiction, and because her husband lives abroad, there is little option. Her family must eat.

UNODC supports the Ministry of Public Health of Afghanistan in providing kits (composed of needles, syringes, condoms, cotton, spoons, tourniquets and antiseptics) and primary health care, including to help women who inject drugs to heal wounds. The Ministry refers clients to a voluntary and confidential counselling and HIV-testing centre in the city of Herat.

Amina has a parting word of advice for women who use drugs: “It is very difficult to care for your children when you are addicted to drugs. It pains me to see my children suffer. You also cannot be a productive member of society, because you keep hiding. Get help.”

Amina is 35 years old. She is married and has six children. She is also addicted to heroin. A housewife from Herat Province in Afghanistan, Amina started using drugs at the age of 10, when she was working as a carpet weaver. The job was strenuous and her workmates advised her to use opium to….

A USA Today report said one-third of the estimated 17.6 million Americans with alcohol dependency are women. Photo illustration by David Wells New York mother Diane Schuler gained national attention this summer when she crashed her car into an SUV because she had high levels of alcohol and marijuana in her system. The accident killed….

Police say alcohol-fuelled violence is on the decline in bars and on city streets after the province introduced new liquor rules to discourage binge drinking. Provincial legislation launched last August prohibits happy hour specials after 8p.m., requires bars and pubs to charge a minimum drink price and forbids patrons from having more than two drinks….

To help, or at least do no harm

Canada’s Health Minister urgently needs an education in harm reduction. Announcing his intention to shut down Insite, the supervised injection facility serving drug addicts in Vancouver’s Downtown Eastside, Tony Clement told the House of Commons health committee that “supervised injection is not medicine; it does not heal the person addicted to drugs.” Mr. Clement got….