People who socialize with heavy drinkers are more likely to imbibe a bit too much themselves.

And the same holds true for teetotalers: Those who have non-drinking friends and relatives are more likely not to consume alcohol themselves, a new study found.

“People are organized by their drinking behavior more than would be predicted by chance alone,” said study lead author Dr. J. Niels Rosenquist, a research fellow in the departments of psychiatry and health-care policy at Massachusetts General Hospital and Harvard Medical School. “There appears to be clustering.”

The effect, which may be just as great as family history and genetics, suggests that new interventions for alcohol abuse may be in order. 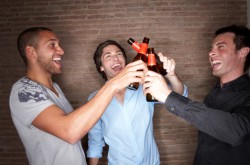 Your drinking habits could cause you serious problems.

“In addition to working with individuals who are drinking more than is good for them, we need to come up with new ways to address this on more of a public health level, looking at groups of people and some of the settings in which they congregate and reinforce each other’s drinking habits,” said Dr. Ralph Manchester, director of the University Health Service at the University of Rochester in New York.

The study authors gathered data on more than 12,000 people who were participating in the long-running Framingham Heart Study. People were asked about their alcohol consumption and their social networks several times over a span of 30 years, from 1971 to 2003.

While drinking habits of friends and relatives did influence individuals, how nearby neighbors and co-workers conducted themselves did not.

The study findings are published in the April 6 issue of Annals of Internal Medicine.

Previous studies have found similar ripple effects for weight gain, smoking, happiness and depression, but, unlike alcohol, these went only one way. For example, if an individual was around people who gain weight, that individual was more likely to pack on pounds as well.

“There seems to be sort of a social transmission, and this fits into that broader pattern,” said Dr. Marc Galanter, director of the division of alcoholism and drug abuse at New York University School of Medicine.

And the social-transmission factor seems to be stronger among females, though it’s not clear why.

The question then is what could be the reason for that, Rosenquist said.

“This is pure speculation at this point, but it may be something to do with social norms by gender,” he added. “For example, women tend to drink less under certain social norms and, if they start drinking heavily, it may be more noticeable among groups of friends and colleagues and may have a bigger effect on their drinking behavior than if a male started drinking heavily.”

Of course, some people have long suspected that heavy drinking could travel in social circles.

“We know from alcoholism treatment that you want to stay away from people who have drinking problems if you have a drinking problem,” Galanter said. “AA [Alcoholics Anonymous] says just to sever your ties with those people to be sure that you stay abstinent.”

One of the toughest steps for an alcoholic is to shake off the denial. It can fester for years until one day he realizes he’s lost — or is on the verge of losing — his family, his job, even his life. So he takes the plunge and starts to seek a path to recovery…..

If you or a loved one is recovering from a drug or alcohol addiction, the need to take prescription medications for an illness or injury can be both dangerous and scary. You don’t want to become addicted to drugs again and yet you know that you need to take the medication. How can you take….

The lifestyle of the people around the globe is changing rapidly. Life has become very fast paced. Every individual faces many challenges at work place, socially and at relation with family and friends. Naturally, tension and pressure is overloading the life of an individual.   People think that the easiest and the most enjoyable way of….

Problems that go with alcohol impact everyone

Kathy vividly remembers the early morning of Oct. 14, 2006. Her husband Jack doesn’t remember a thing. That’s because it was the day their truck was hit head-on by a drunk driver. Along with their 4-year-old granddaughter, they were heading from their home in New Richmond to the family cabin near Superior. They had worked….