Once a person’s body becomes accustomed to large amounts of alcohol on a daily basis, the brain and body cannot function normally without alcohol in the system. This condition can develop in matter of weeks in cases of frequent binge drinking or when consuming large quantities on a daily basis.

Under these conditions, cutting back or abstaining from alcohol can bring on alcohol withdrawal effects within six to 12 hours time. Alcohol withdrawal syndrome develops in cases where a person stops drinking altogether.

According to the University of Iowa, alcohol addiction develops out of a pattern of uncontrolled drinking that causes considerable damage to a drinker’s physical and psychological health. Considering the level of physical dependency at work, alcohol withdrawal syndrome can bring on serious aftereffects, especially in cases where a person has other health problems. 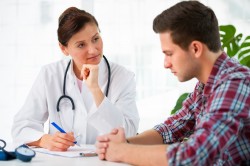 Treatment centers can monitor your symptoms throughout alcohol withdrawal.

According to the National Institute on Alcohol Abuse & Alcoholism, alcohol exerts an inhibitory or depressant-like effect on the central nervous system. Stopping alcohol use after long periods of excess consumptions causes a rebound effect to take place in the brain. This rebound creates a state of hyper-excitability, known as alcohol withdrawal syndrome.

In effect, brain chemical processes overcompensate for the lack of alcohol in the system, which gives rise to the physical symptoms associated with alcohol withdrawal.

Symptoms most likely to develop include:

Depending on the level of the addiction, alcohol withdrawal syndromes are considered minor or major in severity. Standard medication treatments used include benzodiazepine drugs, which produce sedative-type effects. Benzodiazepine drugs commonly used include Librium and Ativan. Sedative drugs directly counteract the brain’s rebound effect during the early stages of detox.

People affected by major withdrawal will display the following symptoms:

At this level of alcohol consumption, most people develop medical conditions as a result of long-term alcohol abuse. Nutritional deficiencies are also present.

Considering the severity of symptoms associated with major withdrawal, treatment typically requires benzodiazepines administered in injection form. Anti-psychotic medications are also given to provide relief from psychotic-type symptom, such as hallucinations and extreme agitation.

Alcohol withdrawal syndrome can place a person in considerable distress and be life threatening in cases of major withdrawal. Alcohol treatment centers offer the safest route when long-term alcohol disorders are at work.

It is a long-observed conclusion that many people with substance abuse problems also have mental health issues. The debate often rests on whether or not one causes the other and if treatment of one can make the other disappear. This can be a heated topic, as some experts insist on treating both as co-occurring disorders,….

A leading surgeon says breast cancer rates could soar unless young women cut back on binge drinking – and that mammograms are being “oversold”. Dr Trevor Smith said alcohol was among the lifestyle choices that contributed towards New Zealand’s having one of the highest breast cancer rates in the world. He called on the Government….

There are many misconceived ideas about addiction that lead people to make poor choices or to overlook certain consequences when addiction is a factor. Though addiction is a science that is continuously being addressed, many of the original ideas and perceptions about this disease continue to stick around in the minds of both those addicted….

Symptoms of Substance abuse in teenagers

Christian treatment centers have a high success rate at not only helping people come clean from their addictions but also helping them stay clean once a person leaves the treatment center. One of the main reasons why Christian based treatment centers are effective is because many people who join become firm believers in Jesus Christ….