The Genetics of Alcoholism

Alcohol consumption is probably as old as human civilization, and so is its abuse. The social and physiological ill effects of alcoholism are well known. What is less clear is why certain individuals are more predisposed to it. Alcohol addiction is a multifactorial phenomenon where personality traits, individual and social influences interact with neurobiology, creating varied clinical results and manifestations. The effect of alcohol on the central nervous system has been established but the exact mechanisms of action remain obscure. Alcoholism has different facets, from habitual intake, to problematic abuse, to addiction resulting in severe physiological damage.

Research now supports the idea that along with other social factors, genetics has an important and critical contribution in the progression of alcoholism.

The comparison of monozygotic and dizygotic twins in different studies has shown a significant correlation between hereditary and alcohol abuse. Children of alcoholic biological parents who were adopted at birth develop alcohol addiction more frequently compared to adopted children with no alcoholic parent. There is a lower genetic risk for alcohol dependence among women. 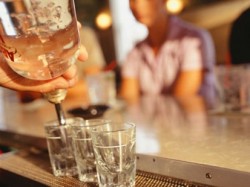 There is a link between alcoholism and genetics.

Candidate gene studies have implicated the genes encoding alcohol metabolising enzymes in the liver like alcohol dehydrogenase (ADH), the microsomal oxidation system (MEOS) and the aldehyde dehydrogenase (ALDH) in the development of alcohol addiction. Genetic studies conducted in various ethnic groups have confirmed that certain allele variations of ADH and ALDH are linked either in development of or in protection from alcohol addiction through a mechanism that is not yet known. The alleles influence the various alcohol addiction syndromes, such as tolerance, sensitivity and dependence. In addition to these genes, neurotransmitter genes have been associated with increased risk for alcohol dependence. Alcohol modifies the neurochemical milieu and acts on many different neuroreceptors although there is no known receptor for alcohol in the brain.

Although the theory that a distinct type of personality leads to alcohol dependency has been rejected, some traits such as low self-esteem and antisocial behavior have been found to be positively correlated to alcoholism. Social modeling and conditioning seem to be significant psychological factors in the development of alcohol addiction. Thus, a complex web of genetic and environmental factors contributes to alcoholism.

Alcoholism is a major economic burden and public health issue. Delineating the genetic components can not only offer information about the risk factors, but also form the theoretical basis for development of therapeutic and educative regimes for its prevention.

Teens are very prone to addiction or drug abuse. It may start with trial of excitement or fun with friends, but they may never know when they get addicted to such a harmful thing. The habit of taking drugs, can largely affect the performance of the teen in the school and also at sports, hampering….

Indian American women who are struggling with alcohol dependence, depression or substance abuse face unique challenges, according to a team of recovery professionals who are targeting the community. “Living here in the U.S. is a very major stress,” Arun Jethanandani, M.D., told India-West by phone from the Brookhaven Retreat in eastern Tennessee. “Many women have….

Most often, sufferers of bulimia do not seek medical help for improving their disorder, as they are ashamed or ignorant of their condition. Therefore, many times it is the parents, friends and the relatives of the sufferers, who need to be alert and on suspecting any symptoms of bulimia seek medical advice. The treatment for….

A friend of mine who is an accomplished psychologist and mother of two recently confessed something to me: she likes wine, a lot. After working all day with troubled adolescents, picking her girls up from school and making a dinner that loosely resembles a healthy meal, she drinks. Her daily consumption included one glass of….

Drug addiction…by the time you realize it’s really a problem it has already taken control! So, you’ve decided to seek help? Are you afraid of drug treatment because you don’t really know what it’s all about? It’s really not that drug treatment centers are scary, it’s the fear you have of not knowing what you….