Three quarters of students admit to having consumed a significant amount of alcohol by the end of their school career, while six percent of 12 to 20-year-olds admitted to being heavy drinkers, according to a 2005 survey conducted by Monitoring the Future.

And another survey conducted by the Substance Abuse and Mental Health Services Administration, also in 2005, showed that students in America enrolled in full-time college were more likely to use alcohol to binge drink and to drink heavily, as opposed to their peers who were not enrolled full-time.

Pupils at Manor School in Raunds came up with a number of reasons why teenagers drink.

Amy Hale, a Year 12 student, said: “I think some teenagers feel the need to drink because sometimes there is nothing else to do at night.”

Another student, Chester Hilson, said: “Alcohol is popular among some youths because it releases a sociable side, and makes them feel more comfortable with themselves and each other.” 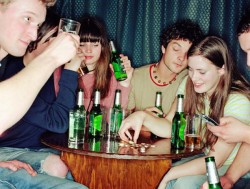 Underage drinking is more common than many thought.

But is underage drinking due to little else being available for teenagers to do, or the result of a less confident generation?

One student at the school said: “At the weekends there are usually parties, and in that environment it’s hard not to drink alcohol.

“I think it’s just a way to relax after a hard-working week at school. I don’t see drinking at my age as illegal if I’m being responsible about it. As long as I am safe, and with people I trust, then it shouldn’t be a problem.”

But peer pressure can play a part in underage drinking, with another student saying: “I began drinking because it seemed like a ‘cool’ thing to do; lots of older people were doing it and I felt like I was missing out if I didn’t join in.”

She said: “Teenagers may feel the need to drink alcohol to follow the crowds, I do think that sometimes it’s just peer pressure.”

In some cases, teenagers are drawn to alcohol as a release for problems at school or home.

However, while this provides a short-term boost, students agree that it does not account for the regular and long-term underage drinking seen today.

Tom Petrie and Jess Bodsworth, who are both A-level students at the college, agree that overall teenagers are attracted to alcohol because “it makes you more confident, helps you to relax and have more fun”.

As part of their AS humanities course, a number of pupils attended several workshops on alcohol consumption to get a better understanding of the downsides of drinking.

The students met Police Community Support Officer Sean Taylor, who gave some much-needed information as someone who has witnessed alcohol-induced crimes and problems caused by youths.

One workshop allowed the Year 7 students, aged 11-12, to use beer goggles to let them realise how out of control people really are when they are under the influence.

There was also a human body model to show how the problems caused by alcohol affect specific parts of the body.

Another workshop allowed the students to estimate the amount of units a person would drink on a night out.

On the final day, a more formal assembly was set up, and a presentation was shown which gave the history of alcohol and pictures of alcohol-abused body parts, such as the liver, brain and pancreas.

There were also images of not so glamorous celebrities, such as Katie Price, Kate Moss, and Pete Doherty, to show they are not ideal role models.

At the end of the workshops, there were some safety tips for the students to make sure that they can be safe and in control when they are legally allowed to and decide to drink alcohol.

After the workshop, all of the students’ feedback on alcohol was negative, with no-one seeing it as a glamorous or celebratory thing to do.

So despite the peer pressure that teenagers face nowadays to drink alcohol before their legal age, taking the time to show them the dangers of drinking irresponsibly can be enough to change their opinion for the better.

OPINION: ‘MILAN HAS banned the consumption and sale of alcohol to young teenagers in an effort to curb binge drinking,” said yesterday morning’s news as I staggered downstairs to make a cup of tea. “Parents of children under the age of 16 caught drinking wine or spirits will be liable to heavy fines of up….

Proteins may point to alcohol use test

Measuring a set of protein changes in the blood linked to alcohol use may potentially lead to a more accurate diagnostic test than those currently available, according to Penn State College of Medicine researchers. “The challenge in alcohol abuse as opposed to substance abuse — things like cocaine or heroin or PCP — is that….

Warning over early exposure to alcohol

Giving children alcohol at an early age increases their risk of becoming drink-dependent at a later stage in life, according to new research. The claim challenges the long-held notion that introducing children to alcohol in small measures over time may prevent teenage binge drinking. The new study, by the US National Institute on Alcohol Abuse….