Starving for alcohol, bingeing on booze

A potentially new form of an eating disorder has people cutting calories to enjoy alcohol without the weight gain. 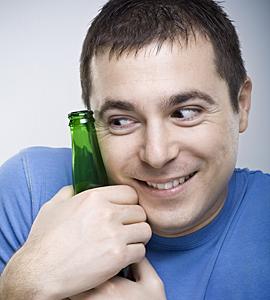 Are you starving for alcohol?

Summer has arrived. As students diet and exercise to get into swimsuit shape, an extension of an eating disorder called drunkorexia makes headlines.

Drunkorexia, a non-medical term, was coined by the media. It refers to “people who do a combination of binge drinking with the typical self-imposed starvation. It has also been used to refer to individuals who use purging to try to reduce caloric intake to offset the calories consumed in alcohol,” according to an article by Dr. Melissa Conrad Stoppler on Medicinenet.com.

Although the media have recently given attention to drunkorexia – it’s been featured on The Today Show and in the New York Times – it is not a new eating disorder.

“There really isn’t such a thing as drunkorexia,” said Jill Langer, psychologist at the USF Counseling Center.

Kim May, registered dietician at the USF Health Center, said that she’s dealt with students exhibiting that type of behavior, but it’s usually part of a bigger disorder.

“I see students with a variety of eating disorders in addition to restriction or purging,” May said.

She said that students involved with eating disorders don’t typically admit to drunkorexia right away, but the subject may eventually come up in the discussion.

On campus, however, there are no statistics to show an increasing or emerging trend of drunkorexia.

“I haven’t heard of it (drunkorexia),” said communications major Travis Nottingham. “This is the first time.”

Additionally, of the students surveyed, 40.7 percent of females reported dieting to lose weight. On The Today Show, it was said that 30 percent of women between the ages of 18 to 23 diet so that they can drink.

“I kind of do that,” said communications major Megan Gederian. “But I’m not hard-core about it. More so I don’t have so many calories.”

Despite the recent media attention stressing a rise in eating disorders, the NCHA showed that within the last 30 days of the survey, 2.1 percent of the students reported vomiting or taking laxatives to lose weight.

For those practicing drunkorexia, however, starving for booze can have serious adverse health effects since the person doing so is missing out on nutritional caloric intake.

The BBC reported that “alcohol is often referred to as a source of ’empty calories,’ meaning it has no nutritive value other than providing energy.” Empty calories can leave a person inclined to have a late-night snack because purging or self-imposed starvation has left them with cravings.

Langer said she is usually told about behaviors that contradict drunkorexia.

International business major Stacey Wood said she can understand restricting calories in order to drink, but it depends on how often a person drinks.

“I think making good decisions is always important,” Wood said. “There’s a balance in everything.

Although USF has no research or statistics showing that students on campus have the drunkorexia disorder, both Langer and May understand why the media are covering it.

“The media is picking up on something that is a dangerous, trendy problem,” Langer said.

May agreed and said she understands why the media would focus on the topic.

“Alcohol is a hot topic on campus. Eating disorders are another hot topic,” she said.

“The two of those going on together is kind of a double whammy,” Langer said.
_________
source: http://media.www.usforacle.com

Attention Deficit Hyperactivity Disorder (ADHD) is a neurobehavioral disorder that is characterized by inattention along with impulsivity or hyperactivity. This disorder cause impaired functioning. It is often detected in children but adults may also suffer from ADHD. Symptoms of ADHD can be divided into three categories; inattention, hyperactivity and impulsivity. Most children suffering from ADHD….

On a recent Tuesday night, Anchorage police sergeant Dennis Allen came upon a familiar face at a bus stop. It was Paul, one of Anchorage’s 400 or so homeless alcoholics who chronically get drunk in public. He was drinking malt liquor from a cup, and Allen made him pour it out. Later Allen came upon….

Study Shows Alcohol Abuse as Teenager Could Affect Future Decision-Making Abuse alcohol when you’re young and you’ll make unwise decisions later on in life, a new study suggests. It is well known that too much alcohol can slow down a person’s ability to think, react, and make decisions at the current moment. But scientists from….

Toughest hurdle to overcome is denial

It is often difficult for the family to admit something is wrong Telling your drug-addicted child he or she isn’t welcome at home unless they get treatment or abides by the house rules is painful for any parent. “But it may be the critical move that eventually saves a child’s life,” said addictions expert Dr…..

Twin research projects have offered both present and future hope to people suffering from alcohol addiction. US researchers say that epilepsy drug topiramate boosts general health as well as cutting the craving for drink. A UK specialist said the potential side-effects of topiramate still merited caution. A separate project showed that a single injection of….