Understanding How the Effects of Drugs on the Brain Cause Addiction

Regardless of the type of drug involved, addictive drugs all exert certain effects that increase the likelihood of ongoing drug use. Also known as psychoactive agents, these drugs are able to cross the blood-brain barrier, which gives them easy access to the brain’s workings.

According to the National Institute on Drug Abuse, drug addiction creates a diseased state inside the brain that’s complex in nature. By the time addiction sets in, the effects of drugs on the brain override any intention or will on the user’s part. 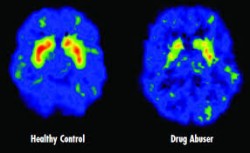 Drugs can cause significant changes in the brain.

Psychoactive drugs can be categorized according to the types of effects they have on the brain:

These varied effects of drugs on the brain correspond with the types of brain chemical processes targeted by any one drug.

In effect, the psychoactive effects of drugs on the brain cause groups of brain cells to secrete abnormally high levels of neurotransmitter chemicals. These chemical secretions account for the drug’s “high” effects as well as any medicinal effects a drug may have.

Every time a person ingests a psychoactive drug, high levels of dopamine flood the brain’s reward system. Each time this happens, the reward system associates the act of using drugs as a positive stimulus. In the process, a person “learns” that taking drugs is good, which in turn motivates ongoing drug-using behaviors.

While the “highs” experienced from drugs can easily fuel a person’s ongoing drug use, deteriorating brain cell structures drive continued drug use on another level. Weakening cell structures require increasingly larger doses of drugs to produce the same desired effects, so a person’s tolerance level will continue to rise as long as he or she keeps using.

These interactions set a vicious cycle in motion. With continued drug use, the effects of drugs on the brain cause widespread deterioration that can become permanent. This cumulative effect accounts for why recovering addicts remain at risk for relapse for years after their last drug use.

A single brief intervention that gives problem drinkers personalized feedback can help reduce their alcohol use, new research from the Netherlands shows. Dr. Heleen Riper of the Trimbos Institute in Utrecht and her colleagues looked at 14 studies of such interventions, including a total of 3,682 people. For every eight people who participated, they found,….

I Was – I am – an alcoholic, now in recovery. I come from a good family, but when I was 15 my parents went through a very bitter split and I couldn’t handle it – my whole support network and the life I had went out of the window. I couldn’t understand, so I….

Permanent housing for homeless patients with ongoing drinking problems can help reduce medical and social costs and lower alcohol consumption, researchers here said. In one year, the so-called “Housing First” program cut costs from about $8 million to $4 million across the study sample, Mary E. Larimer, Ph.D., of the University of Washington, and colleagues….

During the holiday season many high school seniors sort out their college preferences and work on their college applications. If in the midst of that anxiety-producing process, students and parents ask college officials to comment on the culture of drinking and alcohol abuse on campus, they are likely to be assured that the school upholds….

Long ago, it was thought that there actually was a one-size-fits-all method of treatment for addiction that would work for everyone but this could not be more wrong. In fact, in today’s treatment field, professionals know that matching patients with treatment programs that will meet their unique and very individual needs is both highly important….