Treatment that combines sertraline and naltrexone appears to be superior to treatment with either drug alone, as well as to placebo, for individuals with depression and alcohol dependence.

Patients receiving the combination treatment were more likely to achieve abstinence and had delayed relapse to heavy drinking, according to a report posted in the March 15 AJP in Advance.

“[T]he co-occurrence of depression and alcohol dependence is highly prevalent and difficult to treat successfully,” wrote Helen Pettinati, Ph.D., and colleagues at the University of Pennsylvania Treatment Research Center. “The present findings suggest that patients with both disorders would benefit from combination treatment with an antidepressant and medication for alcohol dependence. More patients receiving the medication combination achieved abstinence from alcohol compared with patients receiving single-medication or placebo treatments. In addition, more patients in the medication-combination group were not depressed at the end of treatment.” 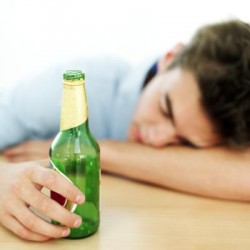 Alcohol dependence and depression get the best of you.

The effect of the combination treatment on both drinking and depression is noteworthy, as there has been limited and contradictory evidence in the literature on the efficacy of antidepressants in patients with alcohol dependence.

In this study, 170 men and women, aged 21 to 75, were randomly assigned to one of the following four treatment conditions for 14 weeks:

All patients had DSM-IV diagnoses of major depression and alcohol dependence. Inclusion criteria were consumption of an average of at least 12 alcoholic drinks per week, consumption of an alcoholic drink on at least 40 percent of the 90 days before treatment, three days of consecutive abstinence just before starting treatment, and a Hamilton Rating Scale for Depression (HAM-D) score of at least 10 at the time of randomization.

“The depression outcome findings in our study were surprising in light of the findings in selected prior literature reporting that depressed alcohol-dependent patients had a more robust reduction in depressive symptoms with an antidepressant than with placebo,” the authors stated. “However, our study found no advantage in treatment with sertraline alone in depressive symptom reduction, and, potentially, portrayed a tendency for a slower mood improvement rate with sertraline over the 14 weeks of treatment compared with the other treatment groups. A tentative observation from our depression outcome results … is that there may be relatively little advantage in prescribing an antidepressant alone for depressed patients who are also alcohol dependent.”

The study was supported by a grant from the National Institute on Alcohol Abuse and Alcoholism and by Pfizer Inc., manufacturer of sertraline, which donated the drug and placebo for the study.

Alcoholism – one of the main reasons behind deadly road accidents, assaults and increasing cases of domestic violence – has been deteriorating the life of millions of people across the globe. Alcohol, when consumed, may relax you and give you the feeling of being less anxious, but you should not forget that it has direct….

Alcohol is increasingly becoming the drug of choice for young people, with a 10 per cent rise of the number of under-18s seeking addiction advice over the past year, new figures show. Angela Slaven, director of youth services at Kent County Council, said while the number of people seeking help for under-age drinking were up,….

If you’ve evaluated your drinking and have decided that you might have a problem with alcohol, then it’s worth taking the next step to investigate what you can do about it. You might still have mixed feelings about whether or not you have a problem; this is a completely normal way to feel and does….

Scottish ministers have stepped up their campaign to introduce minimum pricing on alcohol after Russia yesterday became the latest country to introduce a floor price on spirits. Russia’s national drink, vodka, will be sold for at least £1.80, doubling the price of the cheapest brands available in the country. The move was ordered by Russian….

The Need for Integrated Treatment at Dual Diagnosis Treatment Centers

Alcohol and drug addictions can slowly destroy a person’s life from the inside out. People in drug addiction treatment contend with ongoing pressures and challenges brought about by the long-term effects of drug use. When recovering addicts must also contend with a psychological disorder, the recovery process becomes that much more difficult. Within the addiction’s….