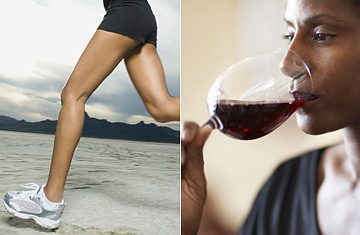 Alcohol can cause your health goals to be pushed to the side.

Sometimes nothing sounds better after a long, hard day than an ice-cold Dos Equis or a glass of pinot noir.

There’s also plenty of research to show that red wine is filled with antioxidants and can increase good cholesterol, while moderate alcohol consumption by men can lead to a decreased risk of heart attack.

So is there any harm in having a few drinks each week, especially if you follow a regular workout program?

“The cons of drinking wine or any type of booze nightly are many,” says Monica Neave, a Tucson-based certified fitness trainer with FreeWorkoutsGuide.com. “If you’re on a fat-loss program, it can mean the difference between getting great results and getting zero results.”

She advises her clients to abstain from alcohol, especially if they are working toward a weight-loss goal.

The truth is, while one glass of wine with dinner may be good for your heart, more than one glass of wine or other alcoholic beverage per night can wreak havoc on your health and fitness goals. Cocktails, especially, are loaded with sugar and calories and bound to nix even the best intentions to hit the gym.

After all, a standard size margarita can have up to 700 calories — more calories than a two-liter bottle of soda, says Christa Jacobo, certified personal trainer and co-owner of Fitness Together at Rita Ranch.

However, if you don’t plan to give up alcohol anytime soon, moderation is key.

The official definition of moderate drinking is no more than two drinks a day for men and no more than one drink per day for women (of the standard serving-size drinks), says Melinda Johnson, a registered dietitian with Nutrition For Slackers and a National Spokesperson for the American Dietetic Association.

Yet, even with moderate drinking, the calories still add up.

A nightly glass of wine will add an average of 100 calories per day to your diet. But multiply that by seven and you get 700 extra calories per week, Neave points out.

“You can’t afford to do this when you are trying to maintain an adequate calorie intake for fat loss,” she says.

Translated into pounds (with 3,500 calories equal to one pound), a nightly glass of wine can amount to an extra 10 pounds gained per year. And that’s if you have the willpower to stick to just one glass per night and ignore the munchies that drinking alcohol often triggers.

Cristina Lopez, 28, realized a few months ago that alcohol was sabotaging her fitness efforts.

“I was going to the gym every day, but I wasn’t seeing results,” she says.

The problem was that she and husband David “were going out a lot and drinking a lot,” and afterward would end up at Jack-in-the-Box ordering jumbo jacks and tacos.

“I thought I could eat and drink whatever I wanted,” she says. “But you really have to pay attention.”

Lee Dorsey, a registered dietitian who enjoys a dark beer about once a week, says if you are watching your weight and want to indulge, you’re better off eating a 1,000-calorie hamburger than drinking a 1,000-calorie cocktail. At least with the burger, you get protein from the meat and other vitamins from the toppings. The alcohol has no nutritional value.

Personal trainer Jacobo says alcohol also stunts recovery time between workouts, decreases the pace at which your body builds lean muscle and acts as a depressant, slowing bodily functions and the immune system.

“I say, give up drinking altogether,” she says. “Even red wines contain a large amount of calories that are not easily worked off. Yes, they do have heart-healthy effects, but save the headache and calories and have a small dish of mixed berries. They are high in antioxidants and have the same effect as the red wine.”

Women who consume more than two alcoholic drinks a day have a higher risk of getting the most common type of heart rhythm disturbance, which can raise the chances of having a stroke, researchers said on Tuesday. Previous research had shown that men who drink three or more alcoholic beverages daily have an elevated risk….

A new Stony Brook University initiative to prevent the consequences of binge drinking has sparked nationwide interest from more than 100 colleges, universities and high schools that want to replicate the program on their campuses. “So many people who have been affected by the loss of a loved one or an acquaintance or a friend….

Drug testing basically involves collecting the urine samples to test the different drugs like cocaine, marijuana, PCP, amphetamines, etc. The teenagers, are especially more vulnerable to drug abuse as their body and brains are still developing. This can lead to adverse effects on his health, body, behavior and brain. There are number of methods that….

5 Poor Excuses Not to Get Treatment for Addiction

Not getting treatment for addiction is a very poor and irresponsible decision. Alcoholism ranks as the third leading lifestyle- related cause of death, according to the Centers for Disease Control & Prevention. Within any given year, as many as 80,000 people die from alcohol abuse disorders. On average, each death represents 30 years of life….

Senate Health Committee expected to consider bill that would cause facilities to prove they meet certain licensing requirements. A bill that would create more hurdles for drug and alcohol programs seeking licenses from the state is making its way through the California State Assembly. Assembly Bill 2903 would make recovery homes offer proof to the….