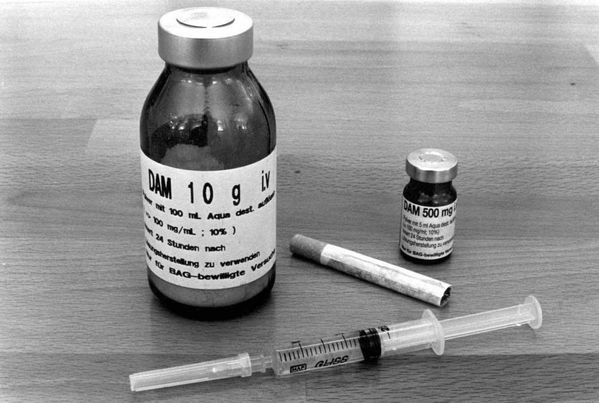 VANCOUVER — A clinical trial that prescribed heroin to drug addicts found that users did not appear to distinguish the powerful street drug from a legally available prescription painkiller, researchers say.

And that offers hope of a treatment option that is legally and politically more palatable than providing drug addicts with heroin, they say.

Users in the study did not appear to distinguish the injection painkiller hydromorphone from heroin.

Hydromorphone is already available by prescription and “offers legal, political and logistical advantages over heroin,” the study says.

“If you use that drug you get a away from a lot of the stigma and political difficulties associated with heroin,” lead researcher Dr. Martin Schechter, of the University of British Columbia’s School of Population and Public Health, said Friday after results of the study were released.

The North American Opiate Medication Initiative study provided about 250 chronic, long-time addicts in Vancouver and Montreal with either heroin, prescription hydromorphone or methadone.

Researchers wanted to see if providing the drugs would keep users from resorting to crime to pay for street drugs, and allow them to focus instead on stabilizing their lives.

Schechter said the results suggested drug addicts can be helped.

“This is a group that society usually writes off as beyond help,” he said.

After one year, 90 per cent of the addicts being provided heroin were still in the program and 54 per cent in the methadone program remained – much higher than the retention rates for conventional treatment, Schechter said.

“So, that’s one finding: that these people are not beyond hope, that they can be attracted and retained in treatment.”

Researchers said they found a decrease in criminal activity and use of street drugs, and an improvement in health among participants.

Funded by an $8.1-million research grant from the Canadian Institutes of Health Research, the three-year study ended over the summer, and the clinics in Montreal and Vancouver have been shut down.

Researchers have appealed to provincial governments to fund a resumed operation for the clinics, and to immediately allow the use of hydromorphone to treat addicts.

Schechter said researchers continue to follow participants for 24 months after their participation ends. So far, results have not been encouraging.

He said researchers tried to get participants into other conventional therapies, such as methadone.

“Some people do go on to methadone but some do not, and the people who do not relapsed very quickly to back where they were before the study began.”

It’s never too late to seek help for an addiction to alcohol but there are some ways that we can learn to recognize the need for alcohol addiction treatment long before the severe consequences and physical illness begin to fully set in. If you or someone you love drinks alcohol regularly, there’s a chance that….

Sometimes nothing sounds better after a long, hard day than an ice-cold Dos Equis or a glass of pinot noir. There’s also plenty of research to show that red wine is filled with antioxidants and can increase good cholesterol, while moderate alcohol consumption by men can lead to a decreased risk of heart attack. So….

Symptoms of ADHD in children

“Attention deficit hyperactivity disorders” is commonly known as the “ADHD”. This disorder is commonly seen in children and can turn into a chronic mental disorder. Since, this is a mental condition; ADHD largely affects the child’s progress at school and on social front. In a survey, it was found that boys are more prone to….

Regular Opiate intake can lead to physical as well as mental deterioration of an individual. If some pain killers or over-the-counter analgesics are used on a regular basis to relieve the body pain they can have adverse effects on the body leading to several complications. Scientifically detox is a “dietary regimen” or an attempt to….