Opiates and the Brain – How Addiction Happens

Opiate addiction develops out of a series of changes that take place inside the brain. Over time, these changes alter the brain’s overall structures and chemical processes. As these alterations take shape, a vicious cycle of opiates and the brain ensues for as long as a person continues to use.

According to the U. S. National Library of Medicine, alterations in brain function become actual brain abnormalities that stem from the ongoing effects of opiates and the brain. As opiates and opiate-derived drugs hold certain chemical similarities to the brain’s own natural chemicals, the brain is naturally susceptible to the effects of ongoing opiate use.

Certain key stages mark the process of addiction as opiates and the brain become more and more intricately entwined. Increasing tolerance levels, physical dependence and withdrawal all work together to drive the compulsive, drug-seeking behaviors that define addiction. 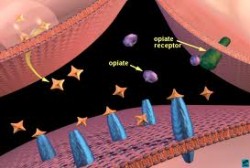 The way opiates function in the brain can cause tolerance, dependence, and addiction.

Opiates and the brain naturally take to one another, which accounts for how quickly an addiction can develop. While most people who abuse opiates do so to experience feelings of euphoria and calm, the chemical processes taking place in the brain take on a life of their own with continued drug use.

Brain cell receptor sites normally secrete endorphins on an as needed basis, whereas repeated drug use weakens and eventually warps receptor site functions. As brain cells grow weaker, larger doses of the drug are needed to produce the same desired “high” experience. In effect, opiates and the brain form an increasingly stronger bond the longer a person uses.

The brain also has a self-regulating mechanism that automatically adjusts endorphin secretion amounts whenever too much or too little is being produced. As a result, it takes even larger doses of the drug to trigger endorphin secretions.

The brain’s reward system plays a central role in regulating learning and motivation. Every time a person experiences a “high,” this part of the brain interprets the experience as a positive stimulus. With repeated use, this positive reinforcement mechanism grows. The vicious cycle between opiates and the brain picks up momentum at this point.

In essence, the brain’s reward system creates a memory or record of:

In the process, drug use becomes a learned behavior. Once a person reaches this stage, both a physical and psychological dependency have developed, and addiction is in full force.

It’s time for Seventh-day Adventists to do more in getting the word out about the dangers of alcohol use and binge drinking among young people, according to DeWitt Williams, health ministries director for the church in North America. Williams points out that the alcohol industry spends a staggering $11 million a day on advertising in….

Signs Your Loved One May Need Alcohol Addiction Treatment

Alcohol is the most abused drug in the world, and is the third leading cause of death in America. Alcohol addiction is a disease that plagues millions of Americans, but it is curable through alcohol addiction treatment and through the right therapeutic techniques. Signs your Loved one is Addicted to Alcohol There are different types….

Take it from a former binge drinker

The ancient Egyptian text of the Papyrus Antastasi gave a look into the satirical, yet advanced minds of society. One quote from this text said the following: “Don’t undertake to drink a whole pitcher of beer. Because if you then talk, from your mouth comes nonsense.” Didn’t we learn anything from the ancient Egyptians? Drinking….

Giving the Alcoholic Person a Successful Start on the Twelve-Step Road of Recovery Since 1977 The New Direction Alcohol Rehabilitation in New York The New Direction was founded in 1977 by Matt and Margaret Batson under the premise that people who make a commitment to A.A. tend to stay sober. Since the doors of the….