I Was – I am – an alcoholic, now in recovery. I come from a good family, but when I was 15 my parents went through a very bitter split and I couldn’t handle it – my whole support network and the life I had went out of the window.

I couldn’t understand, so I rebelled – went out drinking, started doing drugs, living it up, going to nightclubs, getting smashed, hanging about with some really nasty guys and big drug-dealers.

I punished my mum and dad, who were trying to get back together. So much so, my mum had a nervous breakdown.

Later, I was accepted into the Royal Scottish Academy of Music and Drama to study classical guitar, but when I got there, my attitude was, “I am here to party”. 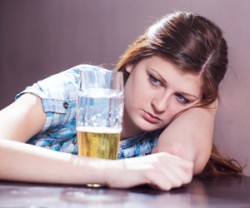 Alcoholic treatment is available to help you overcome your addiction.

I was a successful addict and got so raddled the night before an exam I whizzed through the paper, then got chucked out of the exam room for going to sleep and snoring.

I got my degree, but it wasn’t worth the paper it was written on as I was drunk all the way through the five-year course.

After that, I went to Thailand to teach English. There, the booze was ridiculously cheap. Coming back was the worst experience of my life.

Thirty-six hours on one plane without a drink after I had started experiencing withdrawal at the airport. Everything became surreal. Everything was louder than normal, as if sounds were coming from the world’s biggest amplifier. I was shaking and sweating and I freaked out. I managed to get to the bar and downed some drinks.

When I got home I tried to abstain, but could only manage a couple of weeks at the most. My mum – bless her – tried to help, but I threw everything back in her face.

My mum kicked me out on Christmas Day and I got into trouble with the police for the first time for breach of the peace. I went homeless, and that gave me the freedom to drink and less opportunity to hurt people. I got places in homeless hostels, but my temper was really bad – I was nuts, drinking so much, a bottle or two of vodka a day.

I started begging in the street, because I knew I could make money from it.

I would start at one end of Leith Walk in Edinburgh and stop strangers, telling them I had lost my wallet and asking for a pound for the bus fare home. I could easily make £30 in a few hours. It’s surprising how kind people are. This led to a new routine, positioning myself outside the shop that sold the cheapest alcohol at 7:45am. That was when the alcoholic calculator kicked in.

Alcoholics don’t count money as cash, just certain amounts of alcohol. £4.60 is a three-litre bottle of cider and a bottle of fortified wine. Everyone living rough counts in drink.

I can’t believe the way booze is promoted in Scotland.

I remember going into a supermarket to buy a pint of milk and being confronted with special offers on all sorts of alcohol when I was hardly in the door.

What made me really angry was the alcohol prices were so low and the milk was so expensive. It’s cheaper to buy a litre of cider than a litre of milk.

I cracked up at the staff and later wrote to the head office asking why they were doing this when our country is facing an alcohol pandemic, and saying they’d be helping the community by making everyday goods, like milk, cheaper. Their answer was that the local farmers price the milk, not them.

I thought they could solve two problems in one by switching the prices around, create a good marketing plan, and reduce binge drinking.

The sooner the Scottish Government’s minimum pricing legislation comes in the better.

Only one person is responsible when you become an alcoholic, and that’s you, but society shouldn’t be encouraging those with a weakness out of sheer greed for profits.

By this time I was sleeping rough and there was a lot of violence, but most of it from one homeless person to another, fighting over drink or drugs or their patch or where to sleep. Looking for help to get clean, I got a place at the Bethany Christian Centre in Leith, which is alcohol- and drugs-free.

I sometimes think that getting clean is harder for alcoholics than drug addicts, because alcohol is a socially acceptable and it confronts you whenever you go out.

My support worker, whom I can only describe as an angel, had gone through similar experiences in her past, so she knew exactly what I was going through. People like her can get to the root of your problems by getting you to talk about them, and once those problems are out there in the open they are easier to deal with.

I am terrified about drinking again, but that’s healthy. And while you can never forget it, you don’t want to be ruled by fear. I am totally honest about my addiction. If you are not, you are in denial and not really coping.

In the hostel you live with guys with similar problems. Some of the guys have horrific backgrounds, jaw-dropping stuff, but

I feel I have done more living in the past two and half years than I did in the previous ten.

A new study made by researchers at the University of Montreal and University of Western Ontario showed regular alcohol consumption increases the chance of binge drinking. The report, published in the journal Addiction, was based on close monitoring of 11,000 Canadian respondents the past year of their alcohol drinking habits and patterns. The 11,000 was….

15-year-old who woke each morning wanting a drink has sobered up after therapy involving mountain biking and abseiling. The boy who spent eight months on a Christchurch City Mission adventure therapy course agreed to speak to The Press after an Otago University study into the care of young people with alcohol and drug problems. The….

Parents, Be Aware of the Signs of Teenage Alcohol Abuse this Back to School Season

For parents who are looking for signs of teens drinking this back to school season, there is a reason for your concern, as the use of alcohol by underage individuals is, according to the NIAAA, “widespread.” “In 2009, about 10.4 million young people between the ages of 12 and 20 drank more than ‘just a….