This study shows an important advancement in the treatment of patients who live with both alcoholism and depression because the co-occurrence of these disorders is common in clinical practice, yet antidepressants alone are not sufficient for reducing excessive drinking in these patients.

All 170 patients also received cognitive-behavioral therapy, and the four treatment groups all showed clinical reductions in depressive symptoms over the 14-week study, which was conducted by Helen Pettinati, Ph.D., and colleagues of the University of Pennsylvania. 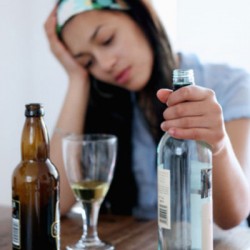 Alcoholism and depression may have a fighting change when treated together.

In addition to a higher abstinence rate, the group receiving combination treatment had a longer interval before resumption of drinking: a median of 61 days compared with 15 days for the other groups combined.

Serious adverse events were actually less frequent in the group receiving both medications, since the most common serious event was hospitalization for detoxification or rehabilitation.

“When depression and alcohol dependence occur together, each condition has a negative influence on the outcome of the other, so not only does this pairing of illnesses affect a lot of patients, it also makes the individual disorders worse,” Dr. Pettinati stated.

“Combining sertraline and naltrexone could be a practical approach for these patients because both have FDA approval.”

The study appears in AJP in Advance , the online advance edition of The American Journal of Psychiatry (AJP), the official journal of the American Psychiatric Association.

Addiction is defined as the recurring physical or the psychological dependency of an individual on a chemical substance which can lead to harmful consequences and the people who are under such addiction are popularly known as addicted.   The cause of addiction can be many, but the main reason behind a person getting addicted is….

'Plunge' event deals with the problems facing youth and alcohol

Like it or not, Wisconsinites are known for loving beer about as much as their passion for cheese. Some studies, though, are showing that this alcohol-enamored mentality isn’t exclusive to the Dairy State’s adults. As a result, some groups are organizing efforts to curb underage drinking among Wisconsin’s youth. One such event-called “The Plunge”-was held….

A new study of young adults in nine European countries found that nearly one in four women and one in three men deliberately engage in binge drinking and drug use to improve their chances of sex. The study also found that young people were more at risk of unsafe sex while under the influence of….

Combatting the risks in teenage drinking is a problem on most college campuses. Now, the University of Wisconsin-Milwaukee is working to help solve it, with help from the experts. According to statistics, 31% of college students across the country met the criteria for alcohol abuse. That number is just from the last year, and it’s….

Researchers at Boston University School of Medicine (BUSM) have found that heavier intrauterine cocaine exposure (IUCE) is associated with mild compromise on selective areas of neurocognitive development during middle childhood. The BUSM study appears in the May issue of Neurotoxicology and Teratology. BUSM researchers evaluated whether the level of IUCE or the interaction between IUCE….