April is alcohol awareness month and one important issue to consider is that alcohol dependence, or alcoholism, and alcohol abuse can be linked to depression and other mental disorders.

There are many studies that demonstrate this link, but one study reported by ScienceDaily suggested that “problems with alcohol abuse may lead to an increased risk of depression, as opposed to the reverse model in which individuals with depression self-medicate with alcohol.”

It’s common knowledge that many people who have depression or other mental disorders engage in detrimental activities like heavy drinking in order to appease symptoms and unwanted feelings. However, it is interesting to think that alcohol abuse can cause serious depression instead of the other way around. It could lead to the conclusion that in different cases, the causes of each type of disorder can shift. 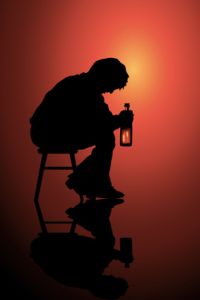 Psychological effects of alcohol abuse can be very dangerous.

Some statistics of the study include that 19.4 percent of participants at ages 17 and 18 (this was a long-term study that followed participants until they were 25) “met criteria for alcohol problems.” Of these participants, 18.2 percent had major depression.

It has been known that alcohol is a depressant, but the study proved to what extent, since major depression is not just a fleeting depressed feeling that some people can experience after drinking a certain amount.

Women in general drink less than men, but they can also have more severe consequences, since “female alcoholics have death rates 50 to 100 percent higher than those of male alcoholics,” according to the National Institute on Alcohol Abuse and Alcoholism (NIAAA). Also, it is estimated that “5.3 million women in the United States drink in a way that threatens their health, safety, and general well-being.”

Another study released in 2005 from the NIAAA showed that “among persons with current major depressive disorder (MDD), 14.1 percent also have an alcohol use disorder (AUD).”

Other findings include that “among persons with lifetime MDD, 40.3 percent had experienced an AUD.” This demonstrates that there is at least some link between depression and alcohol use disorders like alcohol dependence or alcoholism.

Awareness can be key, so those with mental disorders need to find proper treatment and avoid self-medicating in unhealthy ways. Those suffering from alcohol dependence also need to see a health professional, since this could lead to depression and other mental and medical complications.

Center will study effects of alcohol on brain

UNM was given $2.5 million this semester to start one of the nation’s first fetal alcohol research centers. The program is funded by a five-year grant from the National Institute on Alcohol Abuse and Alcoholism. The New Mexico Alcohol Research Center will look at the effects of alcohol on the brain. Dr. Daniel Savage, who….

How to Get a Loved one to Accept Treatment for Addiction

Millions of people suffer from addiction to drugs or alcohol and thousands of families find themselves trying to figure out how to get their loved ones to accept treatment for addiction. Getting someone into treatment is not always as easy as it sounds and anyone who has dealt with an addict knows that sometimes getting….

CHICAGO — Almost one in five young American adults has a personality disorder that interferes with everyday life, and even more abuse alcohol or drugs, researchers reported Monday in the most extensive study of its kind.The disorders include problems such as obsessive or compulsive tendencies and anti-social behavior that can sometimes lead to violence. The….

Recovering alcoholics who focus on positive experiences in their past may be more successful in managing their addiction. This is the finding of a study by Sarah Davies and Professor Gail Kinman of the University of Bedfordshire that was presented on the 16th April 2010, at the British Psychological Society’s Annual Conference in Stratford-upon-Avon. A….