A new campaign by Mayor Bertrand Delanoe tries to persuade young Parisians to shun the fashion for drinking themselves to oblivion at weekends. France used to look down on the British habit of getting smashed and staggering in a stupor through the streets but now it is happening here.

For the past couple of years, the government has been trying to curb le binge drinking, as the practice is known, but to little avail. A survey last autumn reported that 43 percent of young French had drunk at least five glasses of alcohol in the same evening in the preceding month. Increasingly, girls are victims of la biture express, the translation for binge drinking. In another sign of the new culture, kids are also putting videos on the internet of their drunken antics.

Things are not yet as bad as in the UK, but binging is alien to France’s tradition of moderate drinking and against the steady overall decline of alcohol consumption over the past four decades. France even has a non-drinking president who toasts state visitors with mineral water, something that would have been unthinkable in the old days. 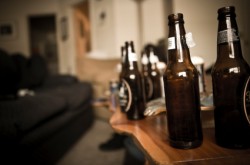 Binge-drinking is a fight that Paris, France wants to win!

The teenagers of France and Italy are about average in the alcohol stakes, according to the last European comparison. The British, Danes, Portuguese and Czechs get plastered most often. Young Finns, Swedes, Hungarians and Spanish are among the milder consumers (difficult to believe it about the Finns).

The phenomenon is especially worrying in Paris, says the mairie. Unlike the British, with their pub crawls, French youngsters prefer to faire la fête in their or their parents’ homes. Dr François Lecomte, head of the emergency service at Cochin, one of the biggest hospitals, told le Parisien recently that his cases of intoxicated under-18s had doubled in 10 months. Five under-18 teenagers a month were being brought in, he said.

There are still differences in binge-drinking on each side of the Channel. Marie Choquet, a research director at Inserm, the national health research institute, suggested in le Parisien last October that the alarm might be exaggerated: “Young French people do not drink in the same way as the English. They consume a lot but in a more spread out way. There is a specific French way: they eat, dance and talk — activities which mean that you do not stock alcohol in the same way as when you down a bottle spread out on a sofa.” Only five percent of 16-25 year-olds indulged in regular binge-drinking, she estimated.

Since addiction has become recognized as an illness, there has been a quest to have more traditional medication treatment alternatives. Two new medicines to help individuals with alcohol dependence, Campral and Vivitrol, have been introduced in the past five years. We’ll explore the benefits and drawbacks surrounding these two medications. Patients need to understand when….

Nearly 267,000 heroin and crack users are on benefits and will be required to own up to their drug problems and take treatment – or lose their money, James Purnell the work and pensions secretary, will say today. He will also announce measures that may take as many as 200,000 families out of child poverty…..

5 Ways to Make the Most Out of Alcohol Abuse Treatment

There are many misconceived ideas about addiction that lead people to make poor choices or to overlook certain consequences when addiction is a factor. Though addiction is a science that is continuously being addressed, many of the original ideas and perceptions about this disease continue to stick around in the minds of both those addicted….