A team of researchers, with Nepali-born Prafulla Aryal as key member, of the Salk Institute of Biological Sciences in La Jolla, California, has located the alcohol-binding site in the brain that could pave the way to a whole new approach to treating alcoholism, drug addiction, abuse-related brain diseases, and epilepsy.

Aryal was born in Jayabageshwari, Kathmandu in 1981 and did his schooling until the fifth grade at Siddhartha Banasthali School. He migrated to the United States in 1991 and is now a US citizen. After receiving undergraduate education from the University of Colorado-Boulder, he joined the PhD program at the University of California-San Diego in 2003. Now a permanent resident of Denver, Colorado, Aryal´s role was instrumental to the finding. 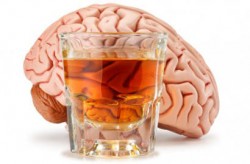 Alcohol in a protein within the brain maybe the cause of alcoholism.

The binding-site is not only responsible for the brain´s response to alcohol, but also to epileptic seizures.

The finding by Aryal and his team, published by the Science Daily on Tuesday, is the closest that scientists have reached in understanding how alcohol affects the brain.

With the finding, “it may be possible to develop a drug that antagonizes the actions of alcohol for the treatment of alcohol dependence,” said the Institute in a statement.

Alternatively, if scientists could find a novel drug that fits the alcohol-binding site, this would dampen overall neuronal excitability in the brain and perhaps provide a new tool for treating epilepsy too, the team´s leader Dr Paul A Slesinger, associate professor in the Peptide Biology Laboratory at the Salk Institute, said in the statement.

In an e-mail to myrepublica.com, Aryal said he had been working on the study at Dr Slesinger´s lab at the Salk Institute for the past four years, as part of his thesis work in the field of neuroscience.

“This work shows, for the first time, a direct binding site for alcohol in a protein involved in alcohol´s action in the brain. This is a very novel and significant finding in the field of alcohol research and neuroscience,” Aryal wrote to myrepublica.com in an e-mail.

He further wrote that the finding was significant in that it sheds light on how exactly alcohol acts on the brain to alter its function. “I think, it is a great advancement in our knowledge about alcohol and for scientists that originated from Nepal,” Aryal wrote.

Other members of the research team are Dr Senyon Choe, a professor in the Structural Biology Laboratory, and Dr Hay Dvir, a postdoctoral researcher in Choe´s lab.

This work was supported by National Institute on Alcohol Abuse and Alcoholism and on General Medical Sciences, the HN & Frances Berger Foundation and the Salk Institute for Biological Studies.

The Salk Institute, a not-for-profit organization, was founded by Dr Jonas Salk, who discovered the Polio vaccine and chose to distribute it throughout the world, without proprietary concern, to eradicate the disease.

Researchers know that alcoholism can damage the brain’s frontal lobes and cerebellum, regions involved in language processing. Nonetheless, alcoholics’ language skills appear to be relatively spared from alcohol’s damaging effects. New findings suggest the brain maintains language skills by drawing upon other systems that would normally be used to perform other tasks simultaneously. Prior neuroimaging….

Boozy girls out of their tiny minds

Scotland’s deadly underage binge-drinking epidemic has seduced a new generation of “pocket-money boozers” – and most of them are Girls. The shocking news comes in a Scottish Sun investigation which shows 3,799 under-16s were treated in hospital for alcohol-related problems in the last five years – some of them as young as Nine. And disturbingly,….

It is very necessary to treat alcohol addiction since it has many adverse effect on the addicts and also indirectly on the society. The best thing is that this addiction can be completely cured, with the strong will of the addict and by following proper treatment method. The treatment of alcohol addiction depends upon the….

Adelaide cabbie Avel Aretas reveals in this graphic account our city’s binge drinking nightmare: Adelaide is the Festival City, but there is one event we should not be proud of – the Adelaide Binge Drinking Festival. It is held every Friday and Saturday night and doesn’t discriminate, involving everyone from 12-year-olds to 60-year-olds, from the….

A new study shows that binge drinking may have far more significant effects than merely a bad hangover the next day. Researchers from the University of Santiago de Compostela in Galicia, Spain, reported that binge drinking can affect the brain in similar ways that are seen in chronic alcohol abusers. Binge drinking is defined in….