Do you let your underage child consume alcohol at home? In Australia, many parents allow and even encourage underage drinking for teens 15 to 17 years of age, even though the impact of alcohol on these children can be significant.

The Australian Drinking Guidelines, released by the National Health and Research Medical Council, recommend that young people under the age of 18 keep any drinking of alcohol to a minimum, and that when alcohol is available to them, they should be supervised by adults. Yet the Australian Drug Foundation website presents research findings showing that early alcohol use increases the risk of later problems with alcohol and other drugs, and that higher levels of alcohol use at age 14 and 15 have been shown to increase the risk of progressing to frequent marijuana use.

Another concern is the impact of alcohol on the brain, as it continues to develop throughout adolescence and into early adulthood. Alcohol affects adolescents and adults differently, and research indicates that adolescents are more vulnerable to alcohol-induced learning and memory problems. 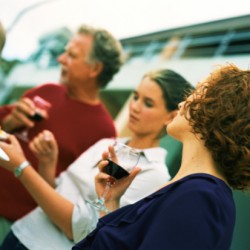 Underage drinking is being encouraged by parents.

The Australian MBF Healthwatch survey interviewed more than 1,200 people and found that many Australians believe it is acceptable to purchase alcohol for adolescents and to let their children drink at home under supervision. According to Dr. Christine Bennett, Bupa Australia chief medical officer, “Some parents may think this is harmless. But we want parents to understand that early exposure may actually be doing them damage.”

Dr. Bennett went to note that early introduction of alcohol increases the risk of long-term alcohol related health problems, and in Australia one teenager a week dies of alcohol abuse. She also pointed out that binge drinking among young people is increasing, and that over consumption of alcohol impairs judgment that can lead to violence and set the foundation for a lifetime dependence.

Professor Ian Hickie, executive director of the Brain and Mind Research Institute in Australia, commented that the findings of the MBF Healthwatch survey “highlight the gap between best medical evidence and parental actions.” He continued that “parents need to understand that early exposure to alcohol can disturb a wide range of key brain functions,” and that underage drinking has “long-term ramifications potentially causing permanent disruption to some of the brain’s most important integrative functions.” Professor Hickie noted that it is important to educate young people and parents about the risks of underage drinking and how to enjoy alcohol in a socially responsible way.

We all know that music can alter your mood. Sad songs can make you cry. Upbeat songs may give you an energy boost. But can music create the same effects as illegal drugs? This seems like a ridiculous question. But websites are targeting your children with so-called digital drugs. These are audio files designed to….

Alcoholics Anonymous is well known as a self-help programme for people who regularly abuse alcohol, now known to be one adult in five. But the despair, confusion and resentment suffered by the alcoholic is invariably felt by their family too. I know this from both sides of the fence: as the child of a drink-dependent….