Drinking during pregnancy can seriously harm a baby’s brain, yet thousands of mothers-to-be still do. Now scientists have begun testing whether a prenatal nutrient might offer those babies a little protection, part of a growing quest for ways to reverse the damage.

The only help today: intense behavioral or educational therapies once children with fetal alcohol-caused disabilities reach preschool or school age, says new research by the Centers for Disease Control and Prevention. The agency is spending $1.5 million this year to start spreading those programs so more youngsters can find care.

Better would be discovering a way to short-circuit what scientists now know is a complex chain reaction of toxicity that even moderate drinking during pregnancy — and especially a binge — can trigger in a baby’s developing brain. 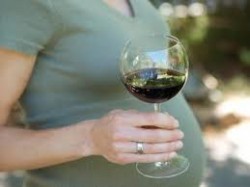 Drinking during pregnancy can cause several problems to the unborn baby.

Don’t misunderstand: This is not a hunt for a pill to allow women to drink. Even if scientists eventually find a treatment, one medication could never cover all the ways that alcohol harms.

“There’s not going to be a single treatment that’s going to be a panacea,” cautions Dr. Jennifer Thomas of San Diego State University, whose animal research sparked interest in the nutrient choline, found in such foods as eggs and liver.

But, “there’s heightened interest now since despite our best efforts, we haven’t eliminated drinking in pregnancy and haven’t made a huge dent in it,” adds Dr. Christina Chambers of the University of California, San Diego. She is overseeing the first clinical trial — aiming to test 600 pregnant women in Ukraine — to see if prenatal choline might help.

About 12 percent of U.S. women drink at least some during pregnancy and 2 percent binge-drink. A CDC study last month concluded those numbers haven’t substantially changed since 1991.

With 4 million annual births, that adds up. Full-blown fetal alcohol syndrome — a combination of brain, facial and growth abnormalities — is considered a leading preventable cause of mental retardation. There isn’t a good count, but the CDC estimates that anywhere from 1,000 to 6,000 U.S. babies a year are born with it. CDC says at least three times as many have less severe alcohol-related neurodevelopmental problems, such as learning disabilities and speech delays.

In parts of the world like Ukraine, fetal alcohol syndrome is far more prevalent.

Chambers stresses that no one thinks the mom who has a glass of wine the week before learning she’s pregnant needs to worry. But because doctors don’t yet know the safe limit, health officials say to abstain during pregnancy. How much damage alcohol causes depends on how much the mother consumes, and at what point in gestation.

Nutrition plays a powerful role in proper development of the brain and nervous system: Getting enough folate during pregnancy, for example, can prevent spina bifida and related birth defects. And significant alcohol consumption interferes with mom’s ability to absorb various nutrients, in turn affecting whether her fetus gets enough.

So Thomas’ group tested choline, a precursor to a brain chemical that plays a key role in learning. She exposed pregnant rats to alcohol during a third-trimester spurt of brain growth. Giving the mother rats extra choline — or, importantly, giving newborn pups the nutrient — significantly improved the pups’ later ability to learn.

On to humans: The study in Ukraine is recruiting women who acknowledge drinking while pregnant. They’ll be counseled to stop, and then randomly assigned to take either a standard Ukrainian vitamin supplement every day, or that vitamin plus 750 milligrams of choline — more than the 450 mg pregnant women are advised to get from food. About 120 women have been enrolled so far, and researchers expect preliminary results within a year.

“Whether you’ll be able to intervene when the woman’s drinking is highly questionable,” acknowledges Thomas, who says future work may need to examine newborn treatment.

The choline pathway isn’t the only possible target:

Northwestern University researchers gave alcohol to rats in the equivalent of the second trimester and recorded a stunning alteration in the gene activity of their pups’ brains — an alteration that in turn led to markedly lower levels of thyroid hormones in brain regions that control learning, memory and emotional behaviors. Children with fetal alcohol disorders also display abnormalities in thyroid hormones, which play a role in brain development, lead researcher Laura Sittig told a recent meeting of the nation’s endocrinologists. The question is whether thyroid hormones might offer a treatment.

This is very early stage science. For already affected children, the CDC advises families to seek behavioral training specifically targeted to fetal alcohol disorders — from the math trouble these youngsters frequently have to the common inability to learn through social experiences.

Maltese boozers start younger but handle their drink better, an international study finds. And while the law has often been amended to address issues such as underage drinking, enforcement has to date been scant. James Debono analyses our alcohol culture through statistics Maltese teenagers are more likely to binge than their peers in the United….

Common Misconceptions About Addiction and Treatment

Substance abuse is commonly perceived as a weakness of the mind, body or spirit but misconceptions like this cannot be more wrong. Unfortunately, many common misconceptions persist in the eyes of addiction and even more so when it comes to treatment. Many people think that addiction is a flaw of character when if fact this….

How much alcohol is too much?

When does drinking cross the line into problem territory? Diagnostic tools abound in medical offices across the country, but realizing that you have a problem with alcohol often happens before you cross a therapist’s threshold. Years of fond memories accumulated from college keg parties, open-bar weddings, and beer pong at cookouts may disguise the fact….