How group gave me strength to live with my alcoholic husband 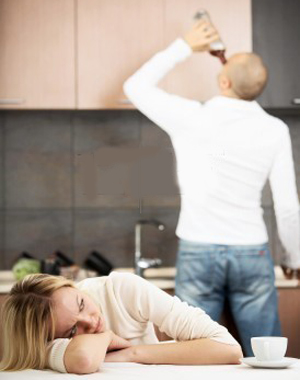 There is support to help you live with your alcoholic husband.

But it was only after attending a local Al-Anon Family Group, for the family and friends of alcoholics, that Mary* realised no one could stop her husband drinking except her husband himself.

Mary, a former nurse in her 60s, and her husband, Mark*, also in his 60s, from Exmouth, have been married for nearly 40 years and have four children.

“It’s difficult to know when I realised he had a drinking problem,” explained Mary.

“We were both heavy social drinkers in the days before one had to wear a helmet on a motorbike. It was a drink culture.

“It was about 30 years ago that I followed him downstairs at 6am and saw him upending a bottle.

“At the time I thought it was ‘hair of the dog’. The second time that it happened I thought there was a pattern.

“I realised he had a problem. I watched him deteriorate day by day, year on year, and our lives got more and more miserable, with more and more rows.”

Outwardly, the couple’s lives continued as normal. They both went out to work, but their home was not a happy one.

“As soon as I came home it was a lead weight in the stomach,” said Mary. “I was treading on eggshells, waiting for the rows and the blame.

“The minute he walked in he would pick faults. He had already been drinking — he would drink at lunchtime and after work, then he would carry on.

“I would find a 1.5-litre bottle of vodka one day. Then the next day it would have gone and there would be another one.

“I used to spend maybe three or four hours every night trying to talk him down, but you are rationalising with the totally irrational. By the next morning he would have forgotten everything — the blackouts are amazing.

“The isolation is one of the worst things. People stopped coming to the house because he was so obnoxious and I was fighting him.

“Then there was the drunk driving, falling over like a log with a carving knife in his hand, falling and hitting his head on pavements and collapsing at work.”

It was one night almost six years ago that Mary found herself at rock bottom. Exhausted, despairing and suicidal, she felt she had nothing left to give — or lose.

“It was hell,” she said. “I was fuming at his denial. I had been suicidal for many years and so had he. I knew there was an Al-Anon meeting in Exeter and that night I went, because I had nowhere else to go.

“I walked into this room of 20-odd people who were calm and smiling and laughing and I thought, ‘I’ve come to the wrong place — how can they do that?’ I couldn’t remember the last time I had smiled or laughed.

“Total strangers gave me their phone numbers. Someone said they had a spare room if I needed it. It was absolutely stunning and I couldn’t believe that these people, who had gone through far worse than me, were smiling and supportive and trusting each other.

“It has just been an incredible journey being in the this programme with those people. I’ve learned how to focus on my own life, and I’ve learned not to be sucked into arguments and screaming matches. I’ve learned to detach and mind my own business.”

Al-Anon Family Groups is based on the Twelve Steps and Twelve Traditions adapted from Alcoholics Anonymous.

The first step is: “We admitted we were powerless over alcohol — that our lives had become unmanageable.” This single statement helped Mary change her life.

“I thought I could make him stop drinking but it doesn’t work.

“It wasn’t until I got to the group that I realised that only the alcoholic can stop drinking.”

Six months ago, Mark collapsed at work and was taken to hospital. He has been sober since Christmas and is attending Alcoholics Anonymous.

“I can see him coming back now, although much older. It’s been amazing — he’s such a nice guy,” said Mary.

“Because we work the same programme, I’m aware he could slip at any time.

“But I also know that I’m totally capable, totally confident that I could do it on my own if I need to.

“Al-Anon helps you in every aspect of your life.

“I would never have said when I started that I would go to more than four or five meetings, but now I can’t imagine life without it.”

* Names have been changed to protect identities.

source: This Is Exeter

Emerson’s Center for Health and Wellness is sponsoring Alcoholics Anonymous meetings on campus, responding to a student’s initiative to offer the outlet to sufferers of alcoholism. A student-led action to offer an outlet to those prone to the accessible excesses of collegiate life, the program was founded by Brady Frome, a sophomore Theatre Education major….

Things to Avoid When Choosing the Right Treatment Center

The decision to seek treatment is a tough decision to make but the challenge doesn’t end there. Once you have opted to seek help there are a number of challenges that surround you such as trying to find the best type of treatment and choosing between various treatment centers that provide a range of services….

A drug currently approved to treat bipolar disorder and schizophrenia may play a role in the treatment of alcoholism. The drug is called aripiprazole (Abilify); researchers say more research is needed, but this first study found the drug helps lessen the euphoric effects of alcohol. Aripiprazole is a dopamine partial agonist, so it works differently….

A new brain imaging study has provided insight into alcohol’s effect on the brain. The study showed that after consuming alcohol, social drinkers had decreased sensitivity in brain regions involved in detecting threats, and increased activity in brain regions involved in reward. This is the first human brain imaging study of alcohol’s effect on the….

Why Doctors Are Giving Heroin to Heroin Addicts

Treating heroin addicts by giving them heroin might seem counterintuitive. But for some of the most hardened addicts, administering heroin in supervised clinics may just do the trick where detox and methadone have failed. Following the lead of Switzerland and a handful of other countries, Britain recently concluded a four-year trial in which longtime addicts….