Alcohol has been a socially accepted and legalized drug in most parts of the world since humans first learned the secrets of fermentation. But there’s a rapidly growing trend of binge drinking, especially among youths. And new figures released by German authorities have got experts and parents worried.

According to the Federal Statistics Office in Wiesbaden, almost 26,000 youths aged 10-20 were hospitalized for alcohol poisoning in 2008. That’s an 11 percent increase on the previous year. Over the course of the decade, the registered cases of severe alcohol abuse among youths shot up 170 percent since such data was first collected in 2000. 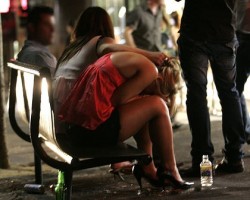 Binge drinking among teenagers is on the rise.

Germany’s federal commissioner on narcotics, Mechthild Dyckmans said it’s difficult to address the issue because, for many, binge drinking has become a part of youth culture.

“Some want to relieve stress, others see it as fun to drink alcohol in their free time,” Dyckmans said. “For some youths it’s simply an ‘in’ thing to do and we know that this binge drinking invariably takes place in groups.”

Dyckmans was particularly shocked by the rising number of young girls on hospital lists. Registered cases of alcohol poisoning for adolescent females jumped by 22 percent in 2008.

“This is a very ominous trend,” Dyckmans said.

“It’s the second time that the number of girls exceeds the number of boys hospitalized in the age group 10-15,” she said. “Apparently, girls want to keep up with the boys. It is essential that we do something about this.”

Dyckmans called for a comprehensive and compulsory ID checking at the cash register to prevent the sale of alcohol to anyone below the age of 18 – the legal age to purchase such beverages in Germany. She wants retailers to instruct their personnel to check on anyone they think may be up to 25 years old.

“This really is just an estimated age,” Dyckmans said. “If you see a young girl today, you would probably have difficulties in judging whether she’s 16, 17 or 23. Age assessments are very difficult up until 25.”

The head of Germany’s branch of Alcoholics Anonymous, Guenther Habedank, shared Dyckmans concerns, but he said the problem must be tackled at its roots rather than treating the symptoms.

“This excessiveness among youths is mainly due to the situation in their homes,” Habedank said. “That’s the weak spot. The parents are both out working and the kids are home alone.”

Habedank believes the kids need proper care and education and is therefore skeptical that stricter age controls are the right step to contain binge drinking.

“It’s already too late when I have to resort to control mechanisms,” he said.

“I have to create a healthy society in advance so that I do not need any further control afterwards. But we’re unable to achieve that any more in our society,” he said.

Both Habedank and Dyckmans would like schools to fill the gap left by parents. Habedank said he is not surprised that binge drinking figures among youths are soaring in the currently harsh environment, especially since the issue of alcohol and drug abuse still takes a backseat in the syllabus of many German schools.

“We adults are no longer role models,” he said. “The youths are simply copying us.”

Like a protective Big Brother, Northwest Kansas Community Corrections has an arsenal of gadgets it uses to monitor the behavior of the inmates it oversees. One of the most promising up-and-coming devices being used is the Scram alcohol monitoring bracelet. Worn on the ankle, the bracelet uses samples of insensible perspiration through the skin to….

The effects of fetal alcohol exposure may be more profound than researchers hoped. Results of a new study reveal the prenatal damage to peptides in the fetal brain may endure into adulthood despite environmental enrichment provided in a child’s early years. Neurotrophins — a family of peptides produced in the nervous system — are critical….

Binge Drinking Not Just a Rite of the Young

Older alcoholics tend to drink heavily more often than younger people, study finds. Older people who are problem drinkers consume more alcohol than their younger counterparts, a new report finds, possibly because they need more alcohol to achieve the same effect. According to a study released this month, people dependent on alcohol who are older….

So many women under alcohol influence

Drunk and disengaged, they put themselves, others in danger This promises to be a good year for Renee Palmer. Next month, she celebrates 10 years of sobriety. Looking back, Palmer hardly recognizes the woman she was in her 30s: a woman who would empty a 20-ounce bottle of Pepsi, leaving just enough to season a….