Research Suggests That Cigarettes’ Power May Not Be In Nicotine Itself 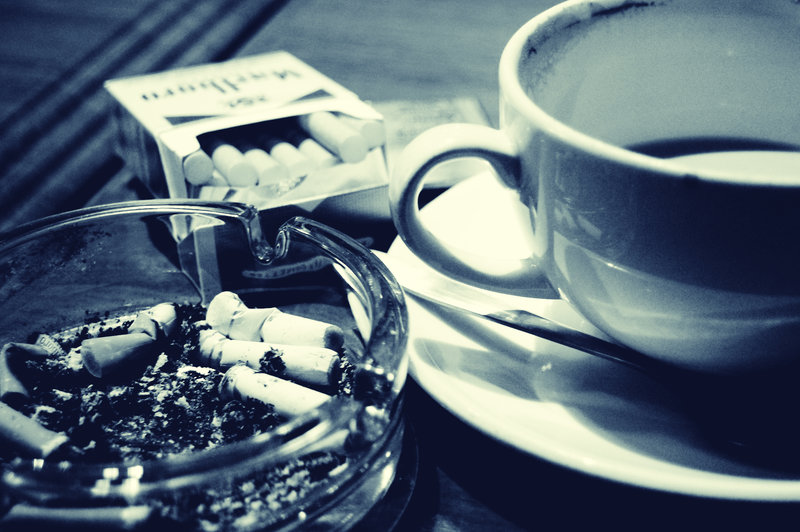 Nicotine addiction may cause a more powerful effect when combined with coffee.

There may be a very good reason why coffee and cigarettes often seem to go hand in hand.

A Kansas State University psychology professor’s research suggests that nicotine’s power may be in how it enhances other experiences. For a smoker who enjoys drinking coffee, the nicotine may make a cup of joe even better.

And that may explain why smoking is so hard to quit.

“People have very regimented things they do when they smoke,” said Matthew Palmatier, assistant professor of psychology at K-State. “If you think about where people smoke or who they smoke with, you realize that it occurs in very specific places, often with a specific group of people. Maybe it’s a reason why nicotine is so addictive – if you get used to having that extra satisfaction from things you normally enjoy, not having nicotine could reduce the enjoyment in a given activity.

“People may not be smoking to obtain a pleasurable drug state. They may be smoking in order to regulate their mood, and that effect could make nicotine more addictive than other drugs.”

Palmatier said much previous research on nicotine addiction has looked at the drug itself rather than the other factors he is studying.

“The approach we’re taking is out of left field,” he said. “But it seems to be one of the best explanations as to why people smoke.”

Palmatier has a grant from the National Institute on Drug Abuse to understand how this phenomenon can be used to better design tobacco addiction treatments, usually offered in patches and pills. He began psychological research in addiction as a graduate student and later began researching the reinforcing effects of nicotine.

“The big picture is trying to figure out why people smoke,” Palmatier said. “There are a lot of health risks, and the majority of smokers already know what they are. They want to quit but can’t. It’s not because nicotine is a potent drug; it doesn’t induce significant amounts of pleasure or euphoria. Yet, it’s just as difficult if not more difficult to quit than other drugs.”

At K-State, Palmatier studies rats that are allowed to self-administer nicotine by pushing a lever. The main source of light in their testing environment shuts off when the rats earn a dose of nicotine. After about a minute, the light comes back on to signal that more nicotine is available.

By manipulating this signal, Palmatier and his colleagues found that the rats weren’t really that interested in nicotine by itself.

“We figured out that what the rats really liked was turning the light off,” Palmatier said. “They still self-administered the nicotine, but they took more of the drug when it was associated with a reinforcing light.”

Palmatier and colleagues published a paper on their research in the August issue of Neuropsychopharmacology.

“The taste aspect is really important because we can actually figure out how nicotine is increasing the subjects’ behavior,” Palmatier said. “If it makes a reward more pleasurable, then it may increase the palatability of a sweet taste.”

Palmatier said that a future phase of research would be determining whether nicotine can make unpleasant experiences more tolerable, helping explain why lighting up after a bad day at work can be tempting.
_______
source: Medical News Today

Administrators urge students to ask for help with alcohol

When Rosalie Cebreros went out with friends Thursday evening, she found herself in a place she least expected: the Addiction Recovery Center. It wasn’t even the freshman’s first visit to the ARC this fall semester. Cebreros, an open-option major, spoke from the audience about her experience with excessive alcohol consumption during a panel discussion on….

When Nick Kemp took a group of business clients to a rain-affected Headingley Test match he was astonished by what he saw. Having decamped to the pub owing to the lack of cricket, he watched in amazement as his companions proceeded to down a dozen pints of beer each. “I was keeping a tab because….

Alcohol is daily consumed all over the globe. Alcohol is a drink which has the power to make psychoactive changes in the brain of the human body. Alcohol, when consumed regularly and in large quantities is sure to affect the physical well being of the person.  People tend to be alcohol addicted because they enjoy….

Teenager Catherine Woollard will be legally allowed to drink for the first time this week – but, for her, the novelty of alcohol wore off years ago. Set to celebrate her 18th birthday tomorrow, she began drinking at the age of 12 following the sudden death of her grandmother. By the time she was 16,….